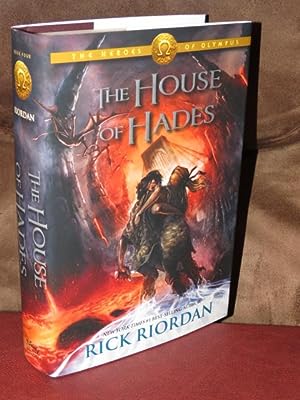 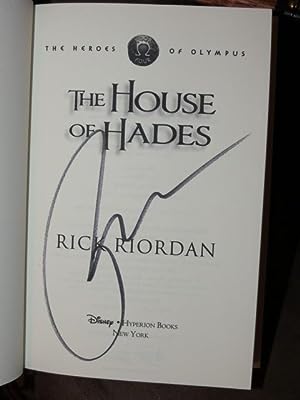 The House Of Hades " Signed "

2013. Hardback. Fine. First Edition. First Print. Signature only by author on the title page. Book four in the Heroes of Olympus series. This book was purchased new, never read, an excellent addition to your collection. Dust jacket is protected with a Mylar cover. Books are packed and shipped in boxes. Buchnummer des Verkäufers 6727

Críticas: Gr 5-8 Fans won't be disappointed as the cliff-hanger ending from the previous book, The Mark of Athena (Hyperion, 2012), leads to further exciting adventures by the intrepid demigods in this penultimate book in the "Heroes of Olympus" series. Annabeth and Percy have fallen down into Tantarus, and they must fight off the attacks from the monsters stuck there long enough to find the Doors of Death. The other five demigods must get to Eprius in Greece, find the House of Hades to open the Doors of Death on the mortal side, save Annabeth and Percy, and seal the entrance to stop Gaea's forces from escaping into the mortal world and destroying it. The Gods are incapacitated by their Greek and Roman personalities warring with one another, and the demigods from Camp Half-Blood and Camp Jupiter are on the verge of an all-out war. As Annabeth and Percy struggle to survive Tantarus's poisonous atmosphere and creatures, the other demigods must undergo harsh trials particularly Hazel, Frank, and Leo, but they learn and grow mentally and physically from their experiences. The heroes realize that they cannot change their parentage but they can control their legacy. While more serious than the previous titles, there are lighthearted moments here, many involving a farting polecat. The horrifying monsters are nicely balanced by peace-loving Titan Bob, a skeleton calico cat called Small Bob, and gentle giant Damasen. Fans will be thrilled to know the series continues with The Blood of Olympus in 2014. Sharon Rawlins, New Jersey State Library, Trenton SLJ"

Having plunged into Tartarus at the end of the last book, The Mark of Athena (2013), Percy and Annabeth struggle toward the Doors of Death, while their friends hurry to meet them on the other side at the titular House of Hades. Riordan is most successful in his evocation of Tartarus and its hellish, monster-infested landscape. Without lightening his heroes' miseries in any way, the author provides a helper and necessary mood-lifter in the person of Iapetus/Bob, the Titan whose memory Percy had obliterated with the waters of Lethe in a previous adventure. Now Hades' janitor, Bob, along with a skeletal saber-tooth kitten he names Small Bob, joins Percy and Annabeth on their trek, causing them both to plumb unexpected moral depths. Meanwhile, on board (and off) the Argo II, Jason, Piper, Leo, Hazel and Frank similarly must come to understand themselves better in order to accomplish the tasks set before them (though not to equal extents). Though Riordan doesn't stint on action or laughs (fart jokes abound, and a tart-tongued Calypso is a special treat), readers may find themselves appreciating these moments of contemplation all the more for the depth of characterization they reveal. The denouement finds the demigods poised for the final battle with Gaea and her minions; they have exactly 14 days to save the world. In this adventure, victories are hard-won and the essence of bravery nuanced, making the journey as satisfying as it is entertaining. (Fantasy. 10-14) Kirkus"

For Percy Jackson fans, it's been a long year since the cliffhanger at the end of The Mark of Athena(2012). Now Riordan picks up the story and carries it to a rewarding conclusion, with the main set of characters reunited and preparing themselves for the final showdown with Gaea. Throughout the book, Percy and Annabeth make their harrowing way through the underworld to the Doors of Death. Meanwhile, Hazel, Leo, Frank, Piper, Jason, Nico, and Reyna endure their own perils, all the way through to the story's climax. In addition to experiencing growth spurts, several of the teen demigods take significant steps toward understanding their powers, accepting their feelings, trusting each other, and taking responsibility for leadership. Adventure fans will relish the action as their heroes confront formidable foes, while readers who have come to love the characters will enjoy following the different individuals as they take the stage in scenes that are usually dramatic, often witty, and occasionally surprising. A satisfying, penultimate entry in the Heroes of Olympus series. - Carolyn Phelan Booklist Online"