Verwandte Artikel zu The ICJ and the Evolution of International Law: The...

Home The ICJ and the Evolution of International Law: The Enduring ...
Beispielbild für diese ISBN 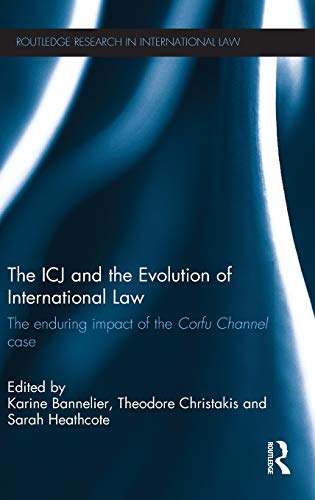 Titel: The ICJ and the Evolution of International ...

In 1949 the International Court of Justice (ICJ) handed down its first judgment in the Corfu Channel Case. In diffusing an early Cold War dispute, the Court articulated a set of legal principles which continue to shape our appreciation of the international legal order. Many of the issues dealt with by the Court in 1949 remain central questions of international law, including due diligence, forcible intervention and self-help, maritime operations, navigation in international straits and the concept of elementary considerations of humanity. The Court’s decision has been cited on numerous occasions in subsequent international litigation. Indeed, the relevance of this judgment goes far beyond the subject matter dealt with by the Court in 1949, extending to pressing problems such as trans-boundary pollution, terrorism and piracy. In short, it was and remains a thoroughly modern decision ― a landmark for international law; and one which today warrants reconsideration.

This book will be of particular interest to academics and students of International Law, International Relations and Legal History

Better World Books generates funding for literacy charities through the sales of second-hand books. Our current partner charities are READ International,the National Literacy Trust, Room to Read, Scottish Book Trust (Registered Charities no. 1128534, no. 1116260, no.1125803, SC027669), and the National Adult Literacy Agency. Much of our stock is ex-library due to our close relationships with UK libraries. We offer a service that helps them keep their unwanted books out of landfill. All ex-library books will be marked as such in their individual listings. 99% of orders are dispatched within 24 hours and we offer a 100% money back guarantee if you are not completely satisfied.


We offer 100% 'no questions asked' refunds. If you are not satisfied with your
book, just send it back to us and we will refund your purchase in full.

Please do not hesitate to contact us with any questions or concerns. Abebooks
will provide you with our contact information after you place your order. We aim
to respond to all queries as quickly as is humanly possible - and certainly within
48 hours.


All orders are shipped next business day. We use a second-class service for most items and Spring Global Mail for international orders.