Verwandte Artikel zu OF THE IMITATION OF CHRIST: IN THREE BOOKS: Translated...

Home Payne, John OF THE IMITATION OF CHRIST: IN THREE BOOKS: Translated from the ... 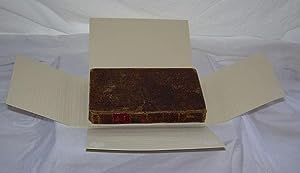 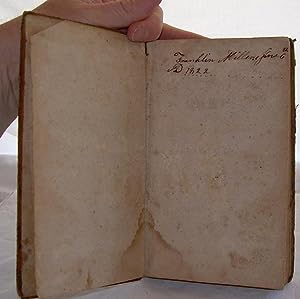 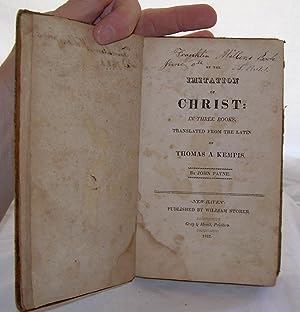 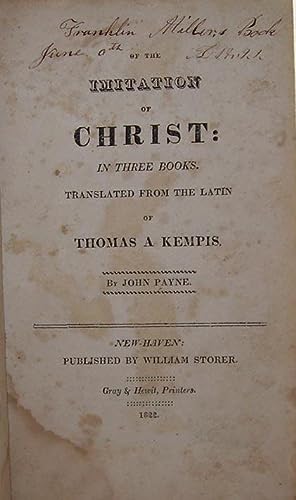 OF THE IMITATION OF CHRIST: IN THREE BOOKS: Translated from the Latin of Thomas A Kempis

B002CIN47Y 1822 William Storer, Gray & Hewit, printers (New Haven, Connecticut) 4 1/2 x 7 1/4 inches tall, 8vo. 42, 210 pp., first thus (American Imprints 9093), first printing of the Imitation in Connecticut (Shoemaker 9094, Parsons 778). Covers are scuffed, rubbed and bumped, both hinges are cracked but hold firm, moderate foxing and some staining, a bit of looseness to the rear free-endpaper at the bottom (but firm). All pages are present and binding is firm. Preserved in a Brodart archival rare book box (made from archival-quality, acid-free, lignin-free, 20-point light tan folder stock with a 3% calcium carbonate buffer), securely held in place by four Velcro buttons, with title page/spine reproduced on the front and spine of the box for easy and attractive identification. [d3] ~EEE~ [1.5P] This uncommon early American printing is a translation from the original Latin by an English Protestant who has sought to de-Catholicize the work as far as possible: Quotations from the Bible, which in the Latin are given from the Vulgate Bible (i.e., the Roman Catholic authorized text), in their English translations here are given from the King James and not the Douai-Rheims or Challoner versions. The Imitation (or De Imitatione Christi) was written in the fifteenth century in Latin by Augustinian monk Thomas a Kempis (circa 1380-1471), as four separate books completed between 1420 and 1427, at Mount Saint Agnes monastery, in the town of Windesheim, located in what is now the Netherlands. He wrote these works for the instruction of novices of his monastic order, followers of Geert Groote's Brethren of the Common Life. But the writings quickly became popular among all the literate faithful. They were copied together in one manuscript as early as 1427, by Kempis, and copied (and later printed) together fairly consistently thereafter. Buchnummer des Verkäufers EEE-0141-151

Titel: OF THE IMITATION OF CHRIST: IN THREE BOOKS: ...