Verwandte Artikel zu OF THE IMITATION OF CHRIST; In Three Books

Home Payne, John OF THE IMITATION OF CHRIST; In Three Books 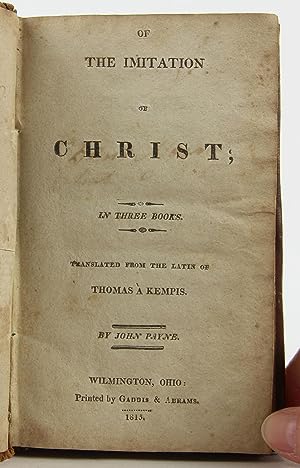 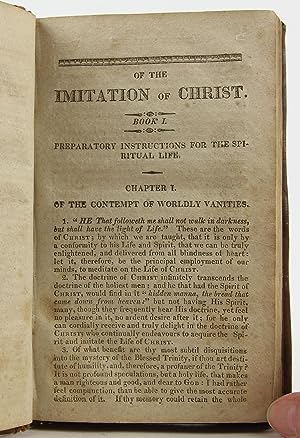 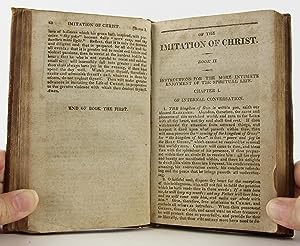 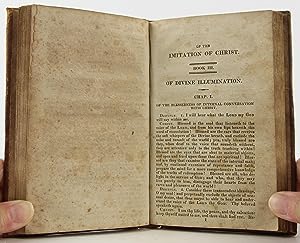 OF THE IMITATION OF CHRIST; In Three Books

B01N1FV8MY 1815 first edition thus, 'Printed by Gaddis and Abrams' (Wilmington, Ohio), 4 3/8 x 6 7/8 inches tall full tree calf leather bound, gilt lettering to spine, 195 pp. Error in printer's pagination, with page numbers for pp. 143-144 inverted, but the text is correct. Moderate rubbing and edgewear to covers, especially along spine and at tips. Period prior owner names and doodle to blank front free-endpaper, and period prior owner name to blank rear-free-endpaper. Light to moderate foxing throughout, typical for early nineteenth century imprints. Light pencil marginal tick marks and marginalia to a handful of pages, easily erased. Very slight crack between front free-endpaper and title page at bottom of page, but the period binding is still quite solid. Altogether a handsome example of an uncommon early American printing of this beloved devotional classic, intended for sale to a burgeoning Protestant and Quaker audience in Ohio and Pennsylvania. OCLC (No. 1013235100) locates only one copy at institutions worldwide, and COPAC has no listing. References: Shaw-Shoemaker, Early Am. imprints, 2nd series, No. 34992; Ohio Imprints 258; Wilkie 369; Parsons, Early Catholic Americana 515. [d3] ~KM5~ [1.5P] An early American edition - the first book printed by this Wilmington, Ohio publisher - of the popular 1785 John Payne (d. 1787) translation of the Imitation of Christ (Copinger, 'On the English Translations of the Imitatio Christi' (1900), pp. 84-87). In the first paragraph of his lengthy preface, Payne explains that he hoped in this translation to do 'some justice to the sense of the Original; which is almost lost in the loose paraphrase of Dean Stanhope,' referring to Anglican George Stanhope's often reprinted 1698 English translation. However, Payne's translation uses the King James Version wording for scriptural quotations within the work, rather than the Vulgate edition of the Bible available to a Kempis in the fifteenth century. And Payne has edited out much from the original which he found overly 'monkish' or 'popish,' including all of Book 4, dealing with the (Roman Catholic) Mass. The Imitation was written by Catholic monk Thomas Kempis (circa 1380-1471), as four separate books completed between 1420 and 1427, at Mount Saint Agnes monastery, in the town of Windesheim, located in what is now the Netherlands. About this printing: Rice Gaddis (1789-1853), a son of Thomas Gaddis, is said to have arrived in Wilmington in September 1814, the family having come down the Ohio river in boats, bringing a printing press and types with them. These were left at Manchester, and the family came to Wilmington and located in a house belonging to Henry Babb. The paper was probably only published a few years, and after its discontinuance Mr. Gaddis removed his press to his home on Todd Fork, where he did job work and published a few original essays. Buchnummer des Verkäufers KM5-0581-9136

Titel: OF THE IMITATION OF CHRIST; In Three Books