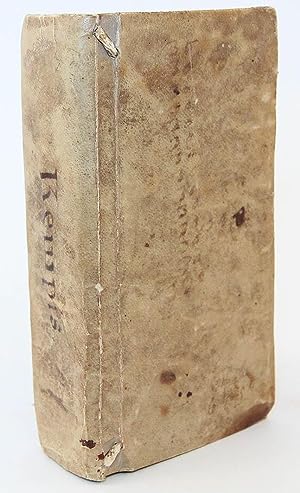 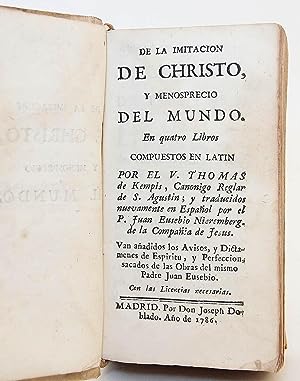 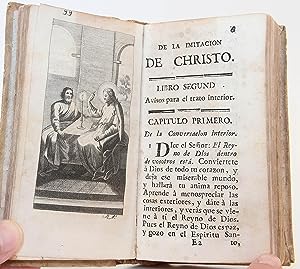 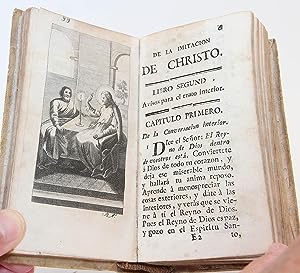 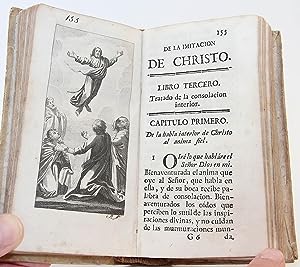 B00KN1UYV6 In Spanish. 1786 Don Joseph Doblado (Madrid, Spain) 2 7/8 x 5 1/2 inches tall full vellum bound, one full-page engraving at the beginning of each of the four 'books,' [20], 563 pp. Lettering ('Kempis') to the spine. Bumping to tips and edgewear to covers. Vellum is characteristically grubby and stained. Rear board is separated from vellum cover, and there is slight shakiness, but the binding holds firm. Creasing and minor worming to front free-endpaper. Otherwise, apart from occasional minor foxing or staining, a very good copy of this scarce early Spanish imprint. (Neither OCLC nor Copac locate any copies of this 1786 Doblado imprint). Four-page introduction and 13-page life of Thomas a Kempis precedes the text of the Imitation, which is followed by 'avisos espirituales' and 'dictamenes de espirirtu' by the translator, Juan Eusebio Nieremberg, and finally 'exercicio utilisimo,' 'exhortacion Christiana' and a detailed table of contents for the main text. ~KMP~ Nieremberg (1595-1658) was a Spanish Jesuit and mystic born to German parents in Madrid. He is now best known for this, his 1656 translation of the Imitation of Christ, but in his lifetime was widely known for three of his own religious works, and his eloquent treatise, 'De la hermosura de Dios y su amabilidad' (1649), is the last classical manifestation of mysticism in Spanish literature. The Imitation of Christ was written (or at a minimum, transcribed) by Catholic monk Thomas Kempis (circa 1380-1471), as four separate books completed between 1420 and 1427, at Mount Saint Agnes monastery, in the town of Windesheim, located in what is now the Netherlands. He wrote these works for the instruction of novices of his Augustinian monastic order, followers of Geert Groote's Brethren of the Common Life. But the writings quickly became popular among all the literate faithful. They were copied together in one manuscript as early as 1427, by Kempis, and copied (and later printed) together fairly consistently thereafter. There is probably no other book other than the Bible which has been printed in so many editions and translations. Buchnummer des Verkäufers KMP-0541-745