Verwandte Artikel zu The Imitation of Christ, in Four Books. Written in...

Home Kempis, Thomas a The Imitation of Christ, in Four Books. Written in Latin by ... 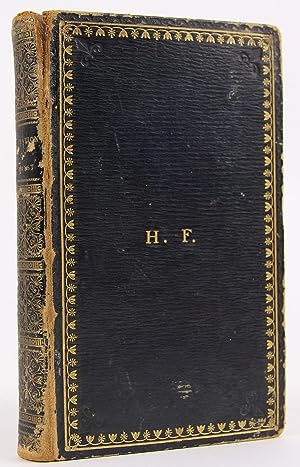 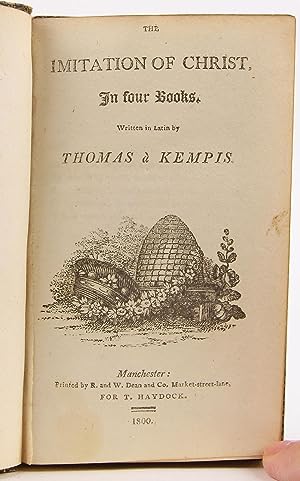 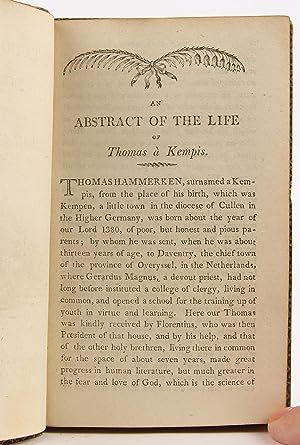 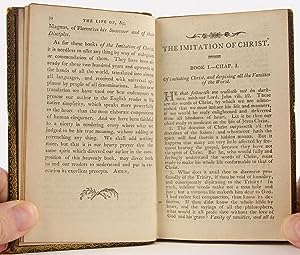 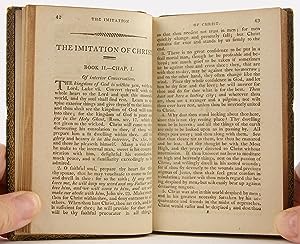 The Imitation of Christ, in Four Books. Written in Latin by Thomas a Kempis.

B01MTEH7LL 1800 first edition thus, Printed by R. and W. Dean, for T. Haydock (Manchester, England), 3 1/2 x 5 1/2 inches tall embossed blue full leather bound, gilt ruling to front and rear covers and elaborate gilt decoration and lettering to spine, all page edges gilt, brown endpapers, engraved title page, vi, 207, [3] pp. Oddly lacking the last four pages of the table of contents at the rear of the volume, but is an otherwise complete copy, including front and rear blank endpapers. Prior owner initials ('H.F.') in gilt to front cover. Moderate to heavy rubbing and edgewear to covers, especially at tips and along exterior hinges. Mild staining to title page. Otherwise, a very good copy of this scarce Manchester edition of the translation of Imitatio Christi by English Roman Catholic Bishop Richard Challoner (1691-1781). The British Library (English Short Title Catalog No. T93924) only locates three copies at institutions worldwide - at the British Library, at the National Library of Wales and at Harvard University. ~KM3~ Richard Challoner was an English Roman Catholic bishop, and a leading figure of English Catholicism during the greater part of the 18th century. He is perhaps most famous for his revision of the Douay Rheims translation of the Bible. Challoner's goal in his translations was to make the classics of Catholic Spirituality accessible to Catholics, in English. To this end he translated this work, 'De Imitatione Christi' (the Imitation, or Following, of Christ) in 1737. The Imitation of Christ was written (or at a minimum, transcribed) by Catholic monk Thomas Kempis (circa 1380-1471), as four separate books completed between 1420 and 1427, at Mount Saint Agnes monastery, in the town of Windesheim, located in what is now the Netherlands. He wrote these works for the instruction of novices of his Augustinian monastic order, followers of Geert Groote's Brethren of the Common Life. But the writings quickly became popular among all the literate faithful. They were copied together in one manuscript as early as 1427, by Kempis, and copied (and later printed) together fairly consistently thereafter. Soon after hand-copied versions of the Imitatio Christi initially appeared, the printing press was invented, and it was among the first books after the Bible to be printed. There is probably no other book other than the Bible which has been printed in so many editions and translations. Buchnummer des Verkäufers KM3-0171-7092

Titel: The Imitation of Christ, in Four Books. ...

Verlag: Printed by R. and W. Dean, for T. Haydock