Verwandte Artikel zu The Imitation of Christ, in Three Books, by Thomas...

Home Kempis, Thomas a The Imitation of Christ, in Three Books, by Thomas a Kempis, ... 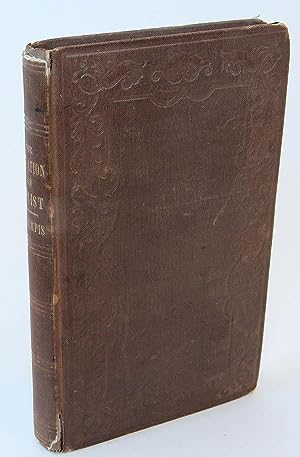 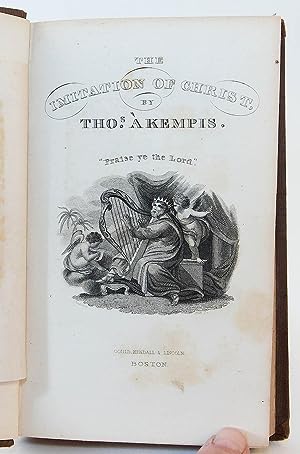 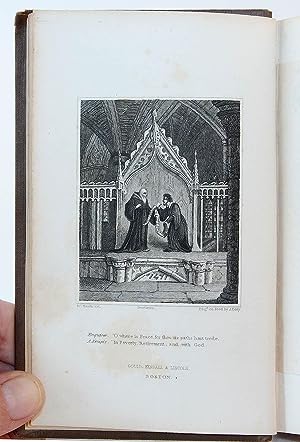 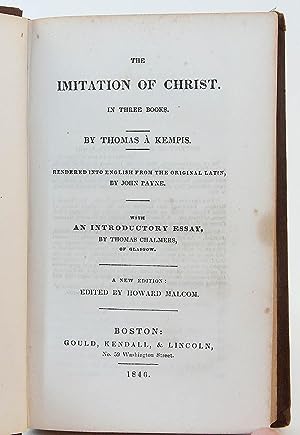 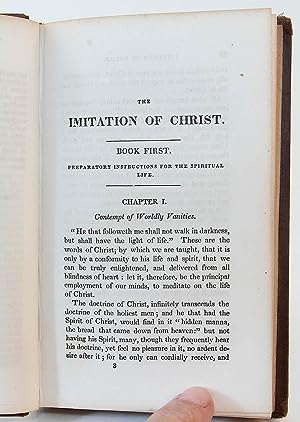 The Imitation of Christ, in Three Books, by Thomas a Kempis, Rendered Into English From the Original Latin By John Payne, with an Introductory Essay by Thomas Chalmers. A New Edition, Edited by Howard Malcom.

B00NDDNA1W 1846 Gould, Kendall, and Lincoln (Boston), 4 x 6 1/4 inches tall brown embossed cloth hardbound, gilt lettering to spine, engraved frontispiece and engraved title page with tissue guard between them, 228 pp. plus 12 pp. of publisher's ads. Bumping to tips. Covers rubbed and edgeworn, especially to tips and spine caps, where there is fraying. 1848 inscription to front free-endpaper. Minor foxing to engraved frontispiece and title, and especially to the tissue guard between them. Otherwise, apart from an occasional minor amount of foxing or slight soiling, a very good copy - clean, bright and unmarked - of this mid-nineteenth century Boston issue of the Payne translation. OCLC (No. 23807522) locates only a half dozen copies worldwide - one in Canada and five at US institutions. The preface from editor Howard Malcom (1799-1879), an American educator and Baptist minister, claims this version 'is no further abridged, than by omitting the exclusive sentiments of a Catholic recluse, and some occasional redundances of style.' (p. ix) Those 'exclusive sentiments' included all of the Fourth Book originally authored by a Kempis in Latin, dealing with the (Catholic) Mass. After Malcom's Preface, there is an 11-page introductory essay from Thomas Chalmers (1780-1847), a Scottish minister, professor of theology, political economist and a leader of the Church of Scotland and of the Free Church of Scotland. He has been called 'Scotland's greatest nineteenth-century churchman.' Reference: Copinger, 'On the English Translations of the Imitatio Christi' (1900), pp. 84-87. The Imitation of Christ was written by Catholic monk Thomas Kempis (circa 1380-1471), as four separate books completed between 1420 and 1427, at Mount Saint Agnes monastery, in the town of Windesheim, located in what is now the Netherlands. He wrote these works for the instruction of novices of his Augustinian monastic order, followers of Geert Groote's Brethren of the Common Life. But the writings quickly became popular among all the literate faithful. There is probably no other book apart from the Bible which has been printed in so many editions and translations. ~KM4~. Buchnummer des Verkäufers KM4-0941-1455

Titel: The Imitation of Christ, in Three Books, by ...