Home Kempis, Thomas a The Imitation of Christ: In Three Books. Translated from the ... 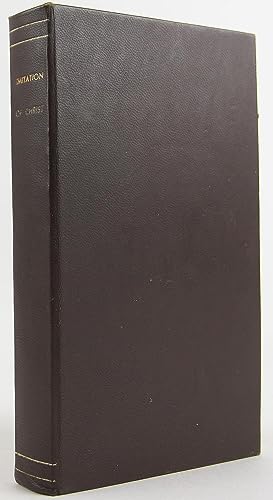 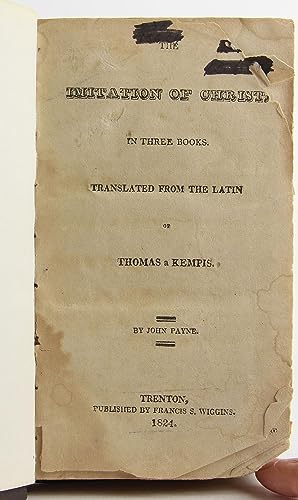 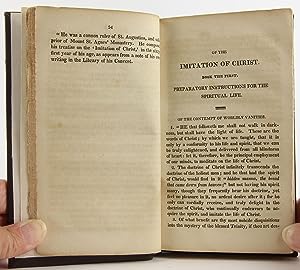 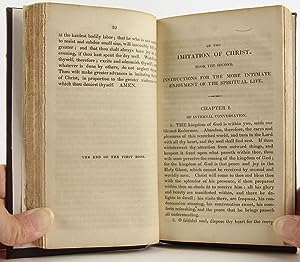 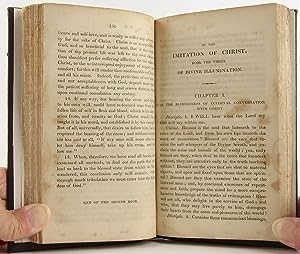 The Imitation of Christ: In Three Books. Translated from the Latin of Thomas a Kempis by John Payne.

B072MXN7SW 1824 Francis S. Wiggins (Trenton, New Jersey), 4 1/4 x 7 1/8 inches tall dark brown full leather bound (likely a modern rebind), gilt lettering and ruling to spine, 264 pp. Minor rubbing and edgewear to leather covers. Title page quite stained, torn and tattered, with a prior owner name lined out in black ink at the upper margin, lacking the upper and lower page tips and partly detached at the bottom of the page. Lower page tips clipped on the first dozen pages or so. Moderate foxing and staining throughout, with a moderate dampstain to the middle of the pages throughout the latter half of the book, especially pronounced in the past few pages of the volume. Despite all these faults, nevertheless a complete copy of this scarce edition which has a handsome shelf appearance. OCLC (No. 26323431) locates only five copies at institutions worldwide - three in New Jersey (Drew University, Princeton and Rutgers), one at Colorado State University in Ft. Collins and one at the New York Historical Society. ~KM3~ An early American edition from Trenton, New Jersey publisher Francis S. Wiggins - of the popular 1785 John Payne (d. 1787) translation of the Imitation of Christ. References: Shaw & Shoemaker, Early American Imprints, second series, no. 8672; Copinger, 'On the English Translations of the Imitatio Christi' (1900), pp. 84-87. In the first paragraph of his lengthy preface, Payne explains that he hoped in this translation to do 'some justice to the sense of the Original; which is almost lost in the loose paraphrase of Dean Stanhope,' referring to Anglican George Stanhope's often reprinted 1698 English translation. However, Payne's translation uses the King James Version wording for scriptural quotations within the work, rather than the Vulgate edition of the Bible available to a Kempis in the fifteenth century. And Payne has edited out much from the original which he found overly 'monkish' or 'popish,' including all of Book 4, dealing with the (Roman Catholic) Mass. The Imitation was written by Catholic monk Thomas Kempis (circa 1380-1471), as four separate books completed between 1420 and 1427, at Mount Saint Agnes monastery, in the town of Windesheim, located in what is now the Netherlands. He wrote these works for the instruction of novices of his Augustinian monastic order, followers of Geert Groote's Brethren of the Common Life. But the writings quickly became popular among all the literate faithful. There is probably no other book apart from the Bible which has been printed in so many editions and translations. Buchnummer des Verkäufers KM3-0671-7530

Titel: The Imitation of Christ: In Three Books. ...