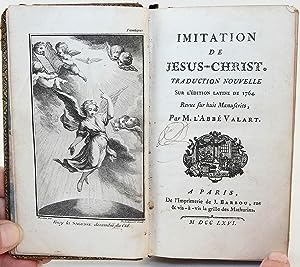 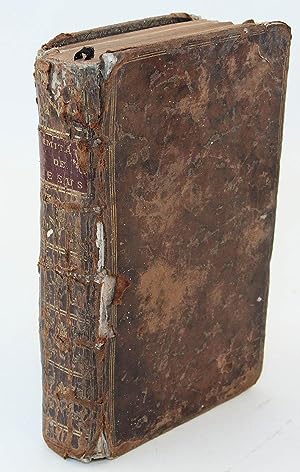 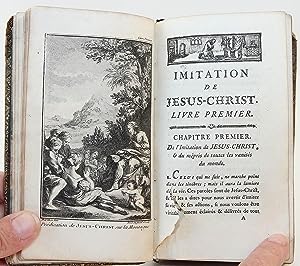 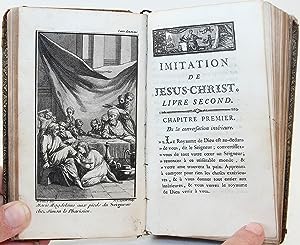 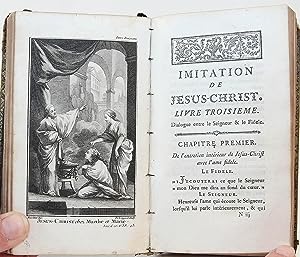 B00N9J0KB8 In French. 1766 'traduction nouvelle' De l'Imprimerie de J. Barbou (Paris), 3 3/4 x 6 1/4 inches tall full contemporary leather bound, gilt-ruled boards, gilt design and lettering to spine, all page edges gilt, marbled endpapers with pastedowns framed by gilt dentelles, fine copper engraved frontispiece and full-page engravings preceding each of the four books of the Imitation by Joseph de Longueil after Clement Pierre Marillier (1740-1808), xxiv, 445, [7] pp. Covers quite rubbed and edgeworn, with chipping, especially along backstrip and tips. Minor soiling to frontispiece and title page, with ink initials to title page. Two-inch closed tear with creasing to bottom of first page of Chapter 1, not interfering with text. A couple of signatures slightly pulled. Otherwise, apart from an occasional instance of minor staining or creasing, a good to very good copy of a scarce Joseph Valart edited edition by Barbou. Joseph Valart (1698-1781) was a French translator, editor, grammarian and philologist. Joseph de Longueuil (1730-1792) was a French writer and engraver. The Imitation of Christ was written (or at a minimum, transcribed) by Catholic monk Thomas Kempis (circa 1380-1471), as four separate books completed between 1420 and 1427, at Mount Saint Agnes monastery, in the town of Windesheim, located in what is now the Netherlands. He wrote these works for the instruction of novices of his Augustinian monastic order, followers of Geert Groote's Brethren of the Common Life. But the writings quickly became popular among all the literate faithful. They were copied together in one manuscript as early as 1427, by Kempis, and copied (and later printed) together fairly consistently thereafter. Soon after hand-copied versions of the Imitatio Christi initially appeared, the printing press was invented, and it was among the first books after the Bible to be printed. There is probably no other book apart from the Bible which has been printed in so many editions and translations. ~KM4~ Engravings - Frontispiece, la Sagesse descendue du ciel (wisdom descended from heaven), livre 1: sermon sur la montagne (sermon on the mount); livre 2: Marie-Madeleine aux pieds du Seigneur (Mary Magdalene at Jesus' feet); livre 3: Marthe et Marie (Martha and Mary); livre 4: la manne, figure de l'Eucharistie (manna figure of the Eucharist). Buchnummer des Verkðufers KM4-0941-1433