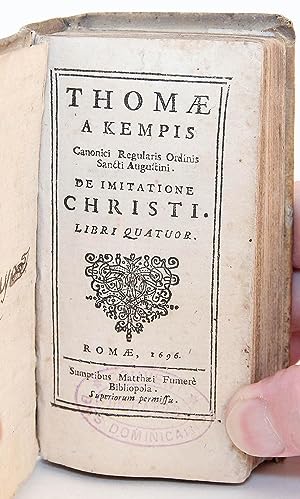 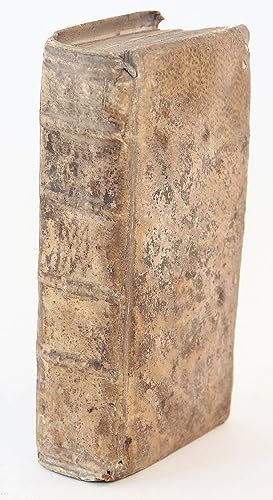 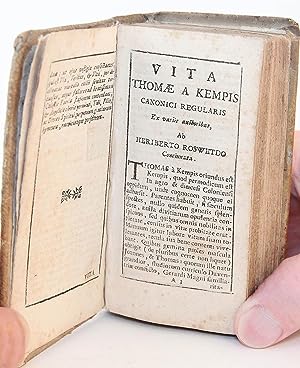 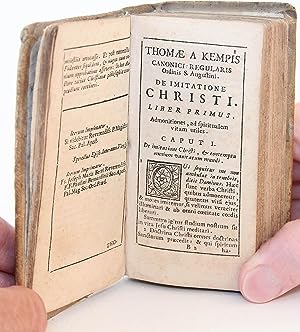 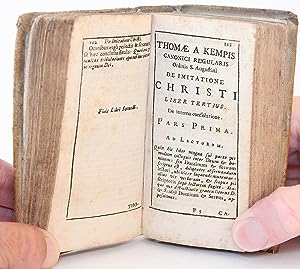 B00LQM16X6 In Latin. 1696 Sumptibus Matthaei Fumere Bibliopola (Rome, Italy), 2 1/2 x 4 3/4 inches tall full vellum bound, [24], 316, [6] pp. Vellum covers are soiled and somewhat rubbed. Old ink notations to endpapers. Dominican monastery stamp to title page. A bit of tearing to pastedowns. Otherwise, a good copy, tightly bound, of a scarce seventeenth century edition of this devotional classic, with no copies listed worldwide by OCLC or Copac. Includes a life of author Thomas a Kempis by Jesuit hagiographer Heribert Rosweyde (1569-1629), and elegies by Ignatius of Loyola (on whom the Imitation was influential) and other prominent Jesuits. ~KM2~ The Imitation of Christ was written by Catholic monk Thomas Kempis (circa 1380-1471), as four separate books completed between 1420 and 1427, at Mount Saint Agnes monastery, in the town of Windesheim, located in what is now the Netherlands. He wrote these works for the instruction of novices of his Augustinian monastic order, followers of Geert Groote's Brethren of the Common Life. But the writings quickly became popular among all the literate faithful. They were copied together in one manuscript as early as 1427, by Kempis, and copied (and later printed) together fairly consistently thereafter. Soon after hand-copied versions of the Imitatio Christi initially appeared, the printing press was invented, and it was among the first books after the Bible to be printed. There is probably no other book apart from the Bible which has been printed in so many editions and translations. Buchnummer des Verkäufers KM2-0741-1018