Verwandte Artikel zu India: A Celebration of Independence, 1947 to 1997 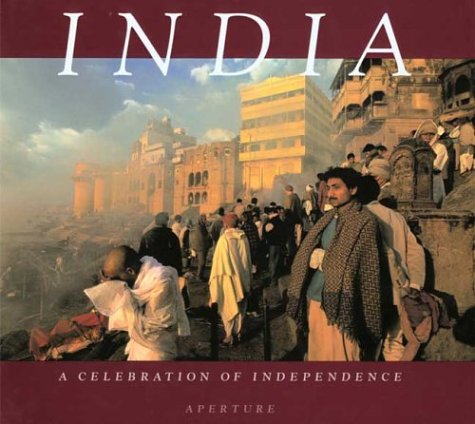 The year 1997 marks the fiftieth anniversary of India's independence from Great Britain. In commemoration of this event, Aperture presents 'India: A Celebration of Independence, 1947-1997,' which accompanies a major touring exhibition of the same title. Together, the exhibition and this book constitute an unprecedented gathering of the most significant photographs to be made in India over the past five decades-- the culmination of a quest to capture the country's essence visually, and to depict the uniquely deep and complex love that binds both native-born and foreign artist to India for a lifetime. The book explores what author Victor Anant, in his stirring essay, refers to as an India that 'lives outside time, in a kind of space that has never been usurped by alien forces': a nation that has always had a fiercely independent spirit, an identity that is both steeped in tradition and constantly evolving. 'India: A Celebration of Independence' features exquisite black-and-white duotone as well as four-color reproductions of the work of twenty-three photographers. Opening with the work of the great Indian photojournalist Sunil Janah, who witnessed and chronicled the fitful birth of India's democracy, the book also features powerful images by Henri Cartier-Bresson, taken during his numerous visits to India, a country he calls 'a haven of the heart.' Also included are a number of breathtaking images by Sebastiao Salgado, who has produced indelible photographic tableaux of the Indian working communities. Embracing many regions and people from all walks of life, the compelling photographs by Raghu Rai represent a convergence of the traditional with the modern, and exhibit his love andprofound understanding of his native India. Among the most prominent younger Indian photographers is Dayanita Singh, whose intimate black-and-white images reveal a keen awareness of a changing cultural identity in her country. Pamela Singh's work compares some of the traditional and new roles available now to women in India. Mary Ellen Mark's portraits of Indian children and street scenes, in both color and black-and-white, provide another inside look at the country's people. Robert Nickelsberg, a resident of New Delhi, focuses on India's recent social and political conflicts, while Charles Lindsay's black-and-white panoramas represent a stiller, more poetic side of the nation's character. We travel with Mitch Epstein into the courtyards of New Delhi and Jaipur, and to the meditative garden of poet Rabindranath Tagore with Rosalind Solomon. Thomas L. Kelly guides us to the stunning Rashtrapati Bhavan, ablaze with lights for Republic of India Day. William Gedney's black-and-white photographs capture the unique rhythm of the Indian street. Steve McCurry has lived and worked for many years in India, developing a personal and comprehensive body of color work, which is represented here. Both Alex Webb and Ketaki Sheth examine icons of India's so-called 'Bollywood,' countered by Sanjeev Saith's color images, which discover quiet moments of contemplation. Also featured is a study of Rajasthan's 'Children's Parliament' by Italian photographer Dario Mitidieri. Finally, the elegant black-and-white images of Swapan Parekh provide an echo of the past as it meets with the present. Altogether, the work of this 'new generation' of photographers attests that India-- a country virtually definedby its many traditions-- is today undergoing an epoch of profound change. The compendium of images in' India: A Celebration of Independence, 1947 to 1997 'provides an invaluable and unprecedented photographic record of this country and the changes it has undergone over the past half century. Victor Anant's opening essay traces the events that led to Independence, and the ensuing political, social, and personal ramifications. The book also contains an informative chronology of India's past hundred years, as well as an Afterword by Anne d'Harnoncourt, the George D. Widener Director. Buchnummer des Verkäufers 188427

In commemoration of the 50th anniversary of India's independence from Great Britain, this volume and a major touring exhibition of the same title constitute an unprecedented gathering of exquisite color and b&w photographs (many of them full-page, and some accompanied by text) as the culmination of a quest to capture the country's essence visually and to depict the deep and complex love that binds both native-born and foreign artists to India for a lifetime. Contains an essay titled "The Sacred and the Secular" and a chronology. No index. Oversize: 12x11<">. Annotation c. by Book News, Inc., Portland, Or.. NOTA: El libro no está en español, sino en inglés.