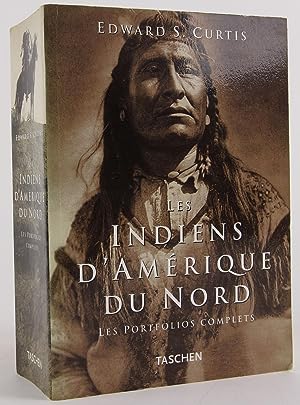 382288104X In French (30 pages of introductory text is in French, but most of the book is photographs with English captions). 1997 Taschen Verlag (Cologne, Germany), 5 1/2 x 7 3/4 inches tall x 2 3/4 inches thick paperbound, mostly magnificent black-and-white photographs captioned in English, 768 pp. Mild rubbing and edgewear to covers. Slight creasing to lower edge and tip of front cover and first few pages of text. Otherwise, a very good copy - clean, bright and unmarked. Note that this is a heavy and oversized book, so additional postage will be required for international or priority orders. ~PPP~ A reproduction of the complete published portfolio of American photographer and ethnologist Edward Sheriff Curtis (1868-1952), whose work focused on the American West and on Native American peoples. Funded by a $75,000 grant by J.P. Morgan, this monumental work was was first issued in 1907, in 20 volumes in an edition edited by Frederick Webb Hodge with an introduction by Theodore Roosevelt. Eventually only 222 complete sets were published. Curtis's goal was not just to photograph but also to document as much of Native American traditional life as possible before that way of life disappeared. He wrote in the introduction to his first volume in 1907, 'The information that is to be gathered . respecting the mode of life of one of the great races of mankind, must be collected at once or the opportunity will be lost.' Curtis, who received no salary for the project, took over 40,000 photographic images of members of over 80 tribes. He recorded tribal lore and history, and he described traditional foods, housing, garments, recreation, ceremonies, and funeral customs. His material, in most cases, is the only written recorded history, although there is still a rich oral tradition that preserves history. Buchnummer des Verkäufers PPP-0871-7889