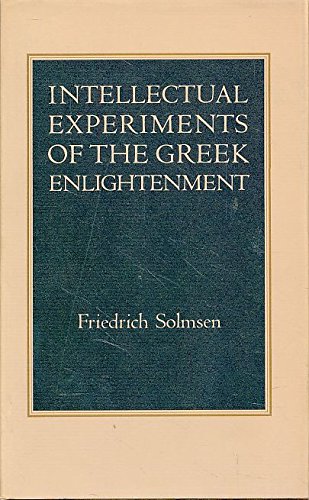 Intellectual Experiments of the Greek Enlightenment.

Titel: Intellectual Experiments of the Greek ...

Generally known for its advanced, often radical suggestions of reform in politics, religion, morality, and human behavior, the Greek Enlightenment has long been studied in terms of its doctrines and theories. To understand the environment in which the new ideas flourished and their impact, Friedrich Solmsen explores the novel intellectual methods that developed during the period.

A variety of new modes of thought was introduced at this time or, if known before, was applied with delight in experimentation. Among those that Friedrich Solmsen examines are new methods of argumentation: persuasion aimed at the control of man's emotions; Utopian speculation; experiments with language; and the emergence of a secular psychology and its use in the reconstruction of human motives and historical events.

Concentrating on the work of nonphilosophical authors such as the historian Thucydides and the tragedian Euripides, the author presents a portrait of a restless and spirited age engaged in an adventure of reason.