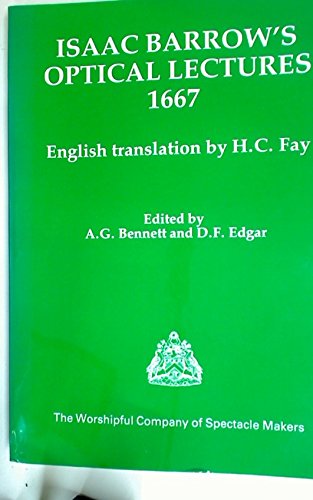 First Edition in English of Cantabrigiae in scholis publicis habitae in quibus opticorum phaenomenon genuinae rationes investigantur, ac exponuntur (1st Latin ed., 1669). Frontispiece, xxxv, 243 pp; 207 figs. + some unnumbered figs. Original wrappers, 4to. Near Fine. 'Barrow's optical lectures, highly praised on their first publication by Sluse and James Gregory, had an equally short-lived heyday, being at once rendered obsolete by the Newtonian Lectiones opticae, which, both in methodology and in subject matter, they inspired. . The most original contributions of the work are his method for finding the point of refraction at a plane interface (Lectio 5,12) and his point construction of the diacaustic of a spherical interface (Lection 13,24): both were at once subsumed by Newton into his own geometrical optics, and the latter (in ignorance) was triumphantly rediscovered by Jakob Bernoulli in 1693' (D. T. Whiteside in D.S.B. I: 475). Whiteside adds that the 1669 first edition is 'rare,' and, enforcing his typical high standards, he adds 'The optical lectures were reprinted, none too accurately, in C. Babbage and F. Maseres' Scriptores optici (London, 1823).' Whiteside's scathing critique of J. M. Child's 1916 English edition of Barrow's Geometrical Lectures is, I think, well-known in the field of history of science; I would like to know Whiteside's thoughts of this English translation of the Optical Lectures. Barrow 'proceeded to erect the foundations of dioptrics on the basis of the sine law of refraction, the first as Barrow was well aware to appear in print. In doing so he made new contributions to the study of astigmatism, caustics and the images of extended objects' (The Dictionary of Seventeenth-Century British Philosophers, Ian G. Stewart, ed., Thoemmes Press, 2000). Buchnummer des Verkäufers D00056