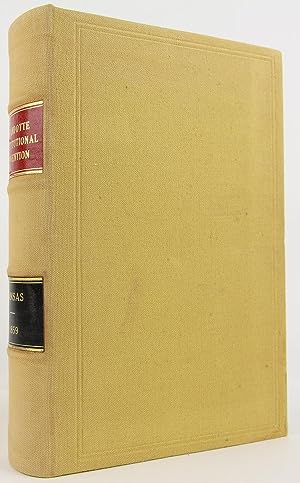 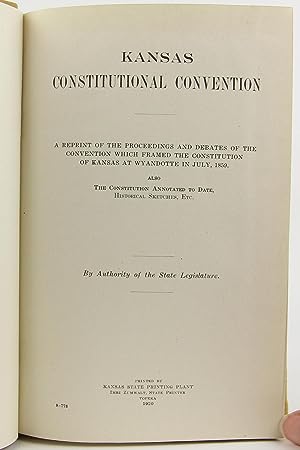 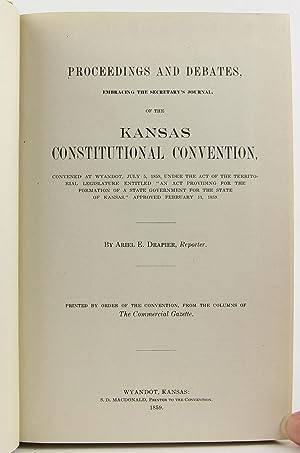 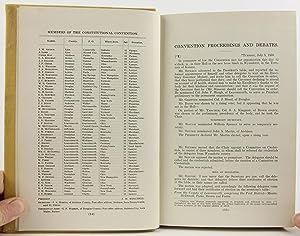 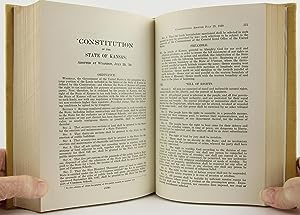 B001L1L71S 1920 Imri Zumwalt / Kansas State Printing Plant (Topeka, Kansas), 6 3/8 x 9 inches tall embossed yellow cloth hardbound, no dust jacket (as issued), four raised bands and gilt-lettered red and black leather labels to spine, 771 pp. Very slight soiling and rubbing to covers. Minor soiling to page edges. Very slight cracking between pastedowns and endpapers, but the binding is quite solid, with no shakiness. Altogether, a very good copy - clean, bright and unmarked - of this century-old reprint of the 1859 Kansas constitutional convention proceedings. Due to the weight of the book, additional postage will be required for standard international orders. ~I~ [3.5P] The present Constitution of the State of Kansas was originally known as the Wyandotte Constitution to distinguish it from earlier proposed state constitutions. Drawn up at Wyandotte (now part of Kansas City) in July 1859, it was the fourth constitution voted on by the people of Kansas Territory, as the battle between proslavery and antislavery forces during the Bleeding Kansas era spread to the debate over the terms of the new state's charter. The Wyandotte Constitution was approved in a referendum by a vote of 10,421 to 5,530 on October 4, 1859. In April, 1860, the United States House of Representatives voted 134 to 73 to admit Kansas under the Wyandotte Constitution; however, there was resistance in the United States Senate. As 11 slave states seceded from the Union, their senators left their seats and on January 21, 1861, the Senate passed the Kansas bill. The admission of Kansas as a free state became effective January 29, 1861. Kansas's constitution is the only state constitution to attempt to recognize 'civil privileges' through 'Almighty God' distinct from rights of citizens of the United States. The preamble also conflates 'America' with 'United States' in its reference to seeking 'to insure the full enjoyment of our rights as American citizens' rather than citizens of the United States. Amended many times (including a universal suffrage amendment in 1912), the Wyandotte Constitution is still the constitution of Kansas. Buchnummer des Verkäufers I-0171-7062

1. Kansas Constitutional Convention: A Reprint of the Proceedings and Debates of the Convention Which Framed the Constitution of Kansas at Wyandotte in July, 1859. Also, The Constitution Annotated to Date, Historical Sketches, Etc.