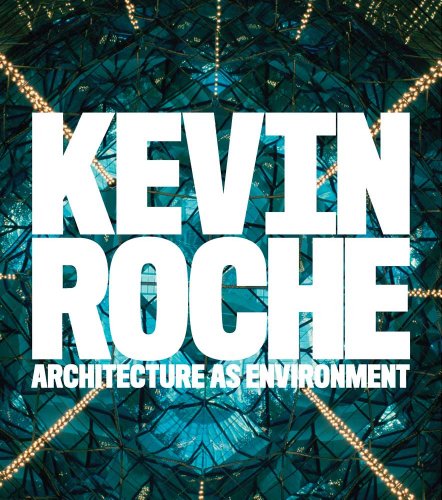 Pritzker Prize-winner Kevin Roche (b. 1922) is one of the most critically acclaimed architects of the postwar era, distinguished for the pioneering urban structures he designed in the 1960s and 1970s, including the Oakland Museum of California and the Ford Foundation Headquarters in New York. In a career that has spanned more than half a century, Roche has pioneered new territories in design methodology, building technology, and environmentalism. A student of Mies van der Rohe's and a principal design associate of Eero Saarinen's in the 1950s, Roche is the leading member of the third generation of modern architects. One of his most important contributions has been to perceive architecture as part of the larger man-made environment, which entailed understanding transportation, infrastructure, and landscape as architectural problems; considering public spaces, including gardens, as integral to architecture; and designing some of the earliest energy-efficient buildings. This book offers a comprehensive look at the extraordinary range of Roche's built work, from his corporate commissions for more than thirty-eight headquarters for such companies as Aetna, Conoco, General Foods, John Deere, Merck, and Union Carbide, to his master plans of major universities and museums, including the Metropolitan Museum of Art, the American Museum of Natural History, and the Central Park Zoo. The book extends to Roche's most recent projects, including recently completed headquarters for Banco Santander in Spain, Bouygues in Paris, and a national convention center in Dublin. Drawing on previously inaccessible archival materials and unpublished interviews to present the full range of Roche's career and to place his innovative work within the history of modern architecture, this book shows why Roche's insistence that architecture is a part of a larger context, both man-made and natural, is more timely than ever. Buchnummer des Verkäufers 158786

Críticas: Won an award in the trade illustrated category in the 2012 AAUP Book, Jacket, & Journal Show -- Award in Trade Illustrated category of the Book, Jacket & Journal Show * American Association of University Professors * "Eeva Liisa Pelkonen offers a comprehensive overview of Kevin Roche's career and positions his work within the context of late 20th-century architecture... which will surely stand as the definitive text on Roche for years."-Belmont Freeman, Places Journal -- Belmont Freeman * Places Journal *

Buchbeschreibung Yale University Press, 2011. Hardcover. Zustand: Good. Connecting readers with great books since 1972. Used books may not include companion materials, some shelf wear, may contain highlighting/notes, may not include cdrom or access codes. Customer service is our top priority!. Bestandsnummer des Verkäufers S_267350829

Buchbeschreibung Yale University Press, 2011. Zustand: Good. A+ Customer service! Satisfaction Guaranteed! Book is in Used-Good condition. Pages and cover are clean and intact. Used items may not include supplementary materials such as CDs or access codes. May show signs of minor shelf wear and contain limited notes and highlighting. Bestandsnummer des Verkäufers 030015223X-2-4

Buchbeschreibung Yale University Press, 2011. Hardcover. Zustand: VERY GOOD. Pages are intact and are not marred by notes or highlighting, but may contain a neat previous owner name. The spine remains undamaged. Supplemental materials are not guaranteed with any used book purchases. Bestandsnummer des Verkäufers 030015223X_abe_vg