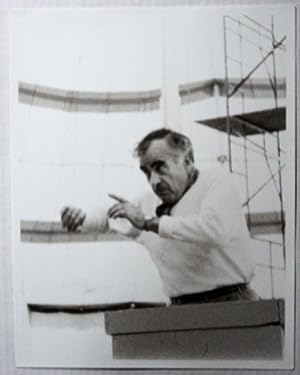 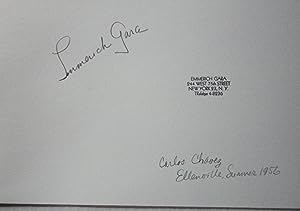 (Ellenville, NY, Summer), (1956). (1956). Fine. - sc - A powerful 14 inch high by 11 inch wide photograph by Emmerich Gara depicting the Mexican composer and conductor Carlos Chavez conducting from a crude podium set up in front of scaffolding. Depicted in three quarter profile from the hip up, Chavez leans forth with furrowed brow while conducting with his hands. Attired in a white sweater tucked into his pants with a colorful scarf tucked into his sweater, the conductor is posed in front of the white tarps punctuated with colorful lines which drape the background. Scaffolding rises up from behind Chavez at right of the image. Photographed by Cellist Emmerich Gara, with his name & address stamped on the verso of the photograph. Signed by Gara in pencil on the verso. Fine. The Mexican composer and conductor Carlos Antonis de Padua Chavez y Ramirez (1899-1978) was a music theorist, educator, as well as a journalist. He founded the Mexican Symphony Orchestra and was also its director. Influenced by Mexican culture, his second symphony, the highly popular "Sinfonia India", uses native Yaqui percussion instruments.Emmerich Gara (b.1901, d.1963). Born in Vienna, Austria in 1901, Gara established lifelong careers as a portrait photographer and professional cellist. Before the outbreak of the Second World War he and his wife emigrated to the United States, where he was hired as cellist for the NBC Orchestra led by Arturo Toscanini. He performed with the orchestra (later called The Symphony of the Air) until his death.From his seat in the front row of the orchestra Gara was in the unique position to photograph all the great conductors and soloists who appeared with the orchestra during this extraordinary period of musical activity. His subjects were captured in performance, rehearsal, and in candid moments during recordings and while socializing.Gara's action portraits were used for record covers, for the Book of the Month Club and in articles in Time, Life and other major magazines around the world. Bestandsnummer des Verkõufers 27785

Titel: A LIVELY BLACK & WHITE PORTRAIT OF THE ...