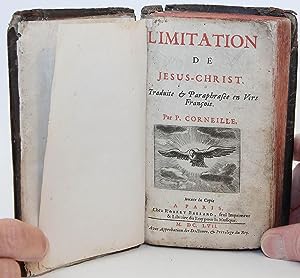 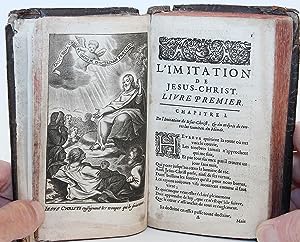 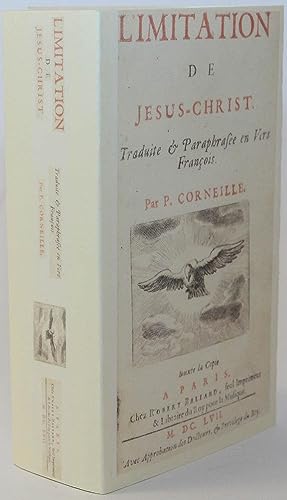 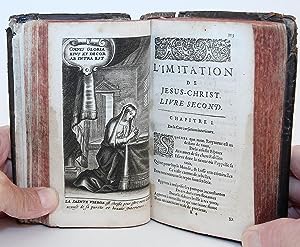 B00KYAABV4 In French verse. 1657 Chez Robert Ballard (Paris), 3 1/2 x 5 3/4 inches tall x 1 3/4 inches thick full leather bound, four raised bands and gilt-lettered red leather label to spine, engraving to title page which is printed in red and black, full-page engraving preceding each of the four books of the Imitation, other engraved printer's devices, [18], 495, [8] pp., complete. Binding is quite rough - rubbed, nicked and edgeworn, with the front hinge cracked through, both boards mildly warped and the front board (which has the letters P, G, R, M, C gilt embossed) is nearly detached, hanging on by one piece of the cords. A piece of the top of the backstrip is lacking. Inside, it appears the original blank front free-endpaper has been replaced but the blank rear free-endpaper is extant, and the copy is otherwise complete. The title page is soiled and slightly chipped at each tip. A majority of the pages have light to moderate marginal dampstains, intruding into the text block for much of the fourth book of the Imitation, though the text is nevertheless quite clear throughout, and the paper remains supple. Ink name to front pastedown and rear free-endpaper, but the book has no other markings. Otherwise, apart from occasional light soiling or very minor foxing, a clean copy and a worthy candidate for a binder's attention, given the scarcity of this imprint. For now, the book is nicely preserved and protected in a Brodart archival rare book box, with the title page to the front and title to the side for easy and attractive identification on the shelf, securely held in place with four velcro button closures. OCLC and Copac only locate two copies, both at the British Library - St. Pancras in London (OCLC No. 771581078) and British National Bibliography in Wetherby, West Yorkshire (OCLC No. 561559552). ~KMP~ Pierre Corneille (1606-1684) was a French tragedian, and one of the three great seventeenth-century French dramatists, along with Moliere and Racine. In 1652, his play 'Pertharite' met with poor critical reviews and a disheartened Corneille decided to quit the theatre. He began to focus on this, an influential verse translation of the beloved devotional work, 'The Imitation of Christ,' which he completed in 1656. It is still widely considered the best of the several poetical translations attempted over the years. The Imitation of Christ was first written (or at a minimum, transcribed) - in his own form of Medieval Latin verse - by Catholic monk Thomas Kempis (circa 1380-1471), as four separate books completed between 1420 and 1427, at Mount Saint Agnes monastery, in the town of Windesheim, located in what is now the Netherlands. He wrote these works for the instruction of novices of his Augustinian monastic order, followers of Geert Groote's Brethren of the Common Life. But the writings quickly became popular among all the literate faithful. They were copied together in one manuscript as early as 1427, by Kempis, and copied (and later printed) together fairly consistently thereafter. Soon after hand-copied versions of the 'Imitatio Christi' initially appeared, the printing press was invented, and it was among the first books after the Bible to be printed. There is probably no other book other than the Bible which has been printed in so many editions and translations. Buchnummer des Verkäufers KMP-0641-828