Verwandte Artikel zu Legends and Lyrics: A Book of Verses by Adelaide Anne... 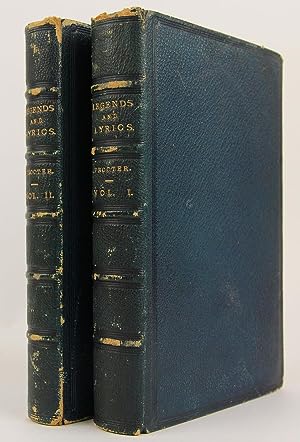 Legends and Lyrics: A Book of Verses by Adelaide Anne Procter, With an Introduction by Charles Dickens (In Two Volumes)

B001GFQMZU 1877-79 George Bell and Sons (London), two 4 1/4 x 6 5/8 inches tall blue pebbled leather bound volumes, five raised bands and gilt lettering to both spines, all page edges gilt, marbled endpapers with gilt dentelles framing the pastedowns, engraved frontispiece with tissue guard in Volume 1, xxxi, 264, vi, 223 pp. Volume 1, printed in 1877, shows 'twenty-ninth thousand' and Volume 2, printed in 1879, shows 'nineteenth thousand' on their respective title pages. Moderate rubbing and edgewear to covers, especially along spine and tips. On both volumes, prior owner name to front free-endpaper and stamp to top margin of half title page. Otherwise, apart from a couple of instances of light marginal soiling, a very good set. ~H~ Adelaide Anne Procter (1825 - 1864) was an English poet and philanthropist. She worked prominently on behalf of unemployed women and the homeless, and was actively involved with feminist groups and journals. Procter never married, and some of her poetry has prompted speculation that she was a lesbian. She became unhealthy, possibly due to her charity work, and died of tuberculosis at the age of 38. Procter's literary career began when she was a teenager; her poems were primarily published in Charles Dickens's periodicals Household Words and All the Year Round and later published in book form. Because Procter's father was a good friend of Charles Dickens, she was initially published under the pseudonym Mary Berwick so her work be judged on its own merits. Her charity work and her conversion to Roman Catholicism appear to have strongly influenced her poetry, which deals most commonly with such subjects as homelessness, poverty, and fallen women. Procter was the favorite poet of Queen Victoria. Her poetry went through numerous editions in the 19th century; Coventry Patmore called her the most popular poet of the day, after Alfred, Lord Tennyson. Her poems were set to music and made into hymns, and were published in the United States and Germany as well as in England. Many modern literary critics view Procter's work as significant, in part for what it reveals about how Victorian women expressed otherwise repressed feelings. Buchnummer des Verkäufers H-1251-5005

Titel: Legends and Lyrics: A Book of Verses by ...