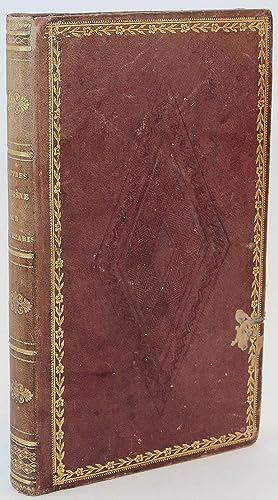 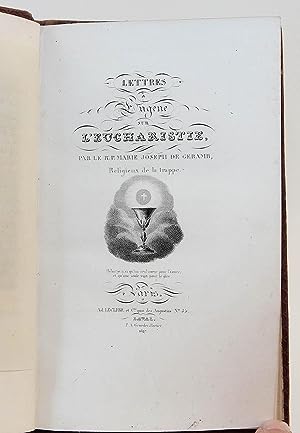 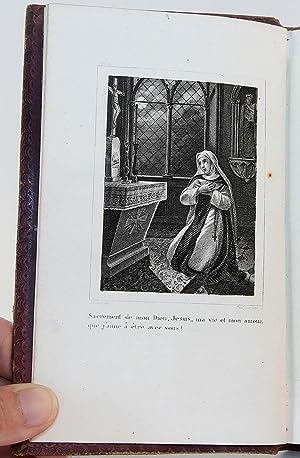 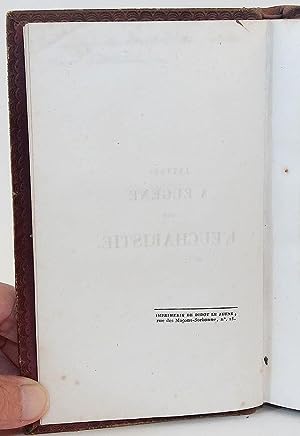 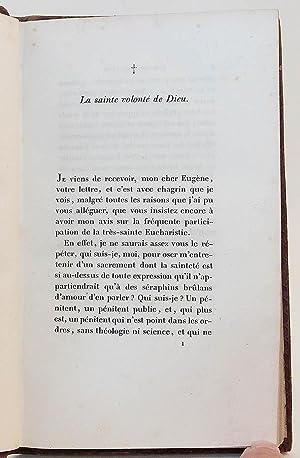 Lettres a Eugene sur l'Eucharistie [Letters to Eugene on the Eucharist]

B00MV72RVK In French. 1827 first edition Ad. Leclere et Cie (Paris), 4 1/4 x 6 7/8 inches tall full leather bound, blind stamp diamond pattern and floral gilt border to both covers, gilt design and lettering to spine, gilt pattern to all edges of both boards, marbled endpapers, engraved frontispiece with tissue guard, small engravings of chalice to title page and lectionary to end of text, xxiv, 180 pp. Covers rubbed, scratched and slightly edgeworn. Approximately 1/2-inch square of chipping to front cover. Sun-fading to covers, especially to spine. Small marginal dampstain to upper tip of the last ten pages of text. Occasional very light foxing throughout. Otherwise, a very good copy - clean, bright and unmarked - of this scarce first edition. OCLC (No. 407056305) only locates two copies of this 1827 first edition worldwide, both in France - one at the Bibliotheque Nationale de France (BnF) in Paris, and one at the Bibliotheque Municipale in Lyon. ~CC~ The author, Baron Ferdinand de Geramb (1772-1848), whose religious name was Brother Mary Joseph, was born into a noble and ancient family in Hungary, and fought for the nobility in the French Revolution, rising to the rank of lieutenant-general. Beginning in 1808, he was imprisoned by Napoleon in the fortress of Vincennes for six years, until the allied powers entered Paris. It was upon his liberation that he met Rev. Father Eugene (for whom this work is named), Abbot of Notre Dame du Port du Salut, near Laval (France), of whom he begged to be admitted as a novice in the community. He pronounced his vows in 1817. In 1827, the year he wrote and published the work offered here, he was sent to the monastery of Mt. Olivet (Alsace). During the Revolution of 1830 de Geramb displayed great courage in the face of a troop of insurgents that had come to pillage the monastery; though the religious had been dispersed, the abbey was at least, by his heroic action, spared the horrors of pillage. Upon his return from pilgrimage to Jerusalem in 1833, he went to Rome, where he held the office of procurator-general of La Trappe. He soon gained the esteem and affection of Pope Gregory XVI, who, though he was not a priest, named him titular abbot with the insignia of the ring and pectoral cross, a privilege without any precedent. 'Letters to Eugene' is probably the best known of Abbot de Geramb's many works, reprinted and translated many times since this first edition. Other popular titles include 'Eternity is Approaching,' 'Pilgrimage to Jerusalem,' 'A Journey from La Trappe to Rome,' in addition to many ascetical works. Buchnummer des Verkäufers CC-0841-1369