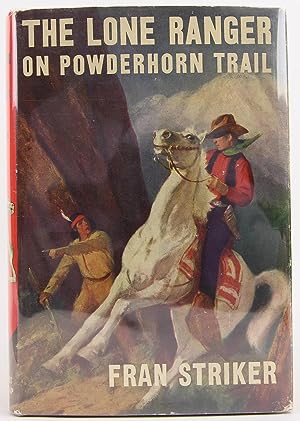 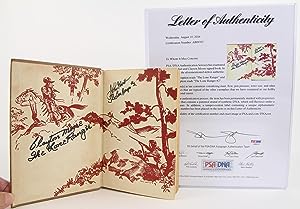 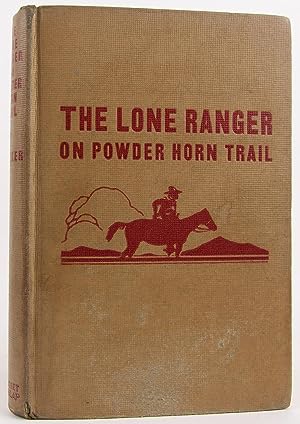 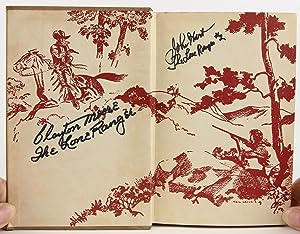 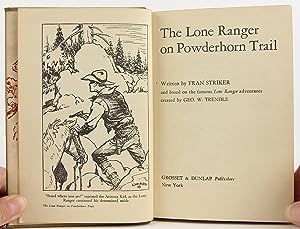 The Lone Ranger on Powderhorn Trail

B0007F0S5U Collectible copy signed by Lone Ranger rival actors Clayton Moore (1914 - 1999) and John Hart (1917 - 2009), authenticated with certificate from PSA/DNA. 1949 first edition, Grosset and Dunlap (NY), 5 3/8 x 7 5/8 inches tall brown cloth hardbound in publisher's first state unclipped dust jacket, red design and lettering to front cover and spine, frontispiece, 207 pp. Covers are moderately to heavily soiled, rubbed and edgeworn, with a bit of bumping to the tips, especially lower tips, with resultant slight creasing to a few lower page tips. Front board is a bit tender and creaky, but the binding is otherwise quite solid. Nicely inscribed and signed by Clayton Moore (who wrote 'The Lone Ranger' under his signature) on the front pastedown and by John Hart (who wrote 'The Lone Ranger #2' under his signature) on the front free-endpaper. Otherwise, apart from a couple of instances of slight marginal soiling and very slight age toning, a clean and unmarked copy in a slightly edgeworn dust jacket with a couple of tiny edge tears but which is nicely preserved and displayed in a clear archival sleeve. Comes with a 2016 letter of authenticity from PSA/DNA, the largest and most trusted third party autograph authentication company in the world, in a clear sleeve. The presence of the signatures of both Moore and Hart on one collectible item is quite uncommon. ~V~ Clayton Moore was an American actor best known for playing the fictional western character the Lone Ranger from 1949-1951 and 1954-1957 on the television series of the same name and two related movies from the same producers. With the 'cavalry charge' from Rossini's William Tell overture as their theme music, Moore and co-star Jay Silverheels made history as the stars of the first Western written specifically for television. The Lone Ranger soon became the highest-rated program to that point on the fledgling ABC network and its first true hit. It earned an Emmy Award nomination in 1950. Based on the assumption that the masked character, rather than the actor, was the true star of The Lone Ranger, the program's producers fired Moore (presumably over salary differences) and replaced him with John Hart, who was of a similar build and had a comparable background in Westerns. However, the public never truly accepted Hart as the Lone Ranger, and by 1954 the producers returned Moore to the role. According to Clayton Moore's autobiography I Was That Masked Man, Moore never knew why he was replaced with John Hart, and also stated that he had not sought a pay increase. Interestingly, John Hart acted in minor roles in two episodes of The Lone Ranger before being asked to replace Clayton Moore for the entire third season. The episodes were 'Rifles and Renegades' (#34) and 'Sheriff at Gunstock' (#46). Hart's last theatrical film appearance was in 1981's The Legend of the Lone Ranger in which he appeared as a newspaper editor. He appeared in the television series Happy Days as the Lone Ranger in the episode 'Hi Yo, Fonzie Away' (February 9, 1982). In this episode Fonzie, played by Henry Winkler, gets to meet his childhood hero, the Lone Ranger, for his birthday. Buchnummer des Verkäufers V-1061-6649

1. The Lone Ranger on Powderhorn Trail

2. The Lone Ranger on the Powderhorn Trail (#11 in Series)