Verwandte Artikel zu NO MERCY: The Host of America's Most Wanted Hunts... 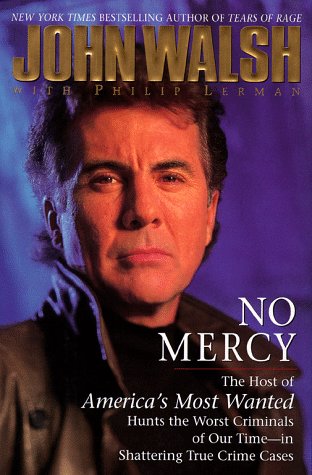 NO MERCY: The Host of America's Most Wanted Hunts the Worst Criminals of Our Time--In Shattering True Crime Cases; SIGNED. *

B00K: As New/, $196.54 0671019937 NO MERCY: The Host of America's Most Wanted Hunts the Worst Criminals of Our Time--In Shattering True Crime Cases; SIGNED. * WALSH, John; LERMAN, Philip Pocket Books New York, New York 1998 First Edition And First Printing . Glossy Blue Spine With Title In Gold And White Letters, Dust Jacket: Fine, Slight Shelf, Edge And Corner Ware, Top Of D/J, Has A Small Amount Of Edge Stretching. Hard Cover BooK: As New, 302 Numbered Pages, That Appear To Be Lightly Read, And Are Clean And Tight To The Spine, Signed By The Author In The Front Of The BooK In Black Ink, Printed As Follows, ?To Bryan___ Thanks for all your work with the National Center for Missing and Exploited Children! God Bless___ John Walsh?. = Description Applies To This B00K, Only. = This Author Signed Book Has A Special Significance, Is Hard To Find, Will Be Packaged And Shipped = Carefully, To Avoid Shipping Damage And Will Make It, An Excellent Addition To Your Own Personal Library Collection, Or As A Gift, For The Discriminating Reader / Collector. = WORLD WIDE SHIPPING, AVAILABLE. =*=* California State Law Now Requires The Following Notice Be Given: *=*=* Seller Did Not See And Was Not Present When This Item Was Signed. No Certificate Of Authenticity Is Included In This Sale/Purchase Price. If You Would Like A Certificate Of Authenticity, You Can Obtain One At Your Own Convenience And Expense, Which Is Not Included In The Purchase Price Of This Item. =*=*. Buchnummer des Verkõufers 004472

Titel: NO MERCY: The Host of America's Most Wanted ...

John Walsh, the host of America's Most Wanted, disclosed the wrenching story of the abduction and murder of his six-year-old son, Adam, in his bestselling memoir "Tears of Rage". Now, fueled by his relentless hunger for justice, Walsh brings forth the untold stories behind the greatest cases Americas Most Wanted has ever solved. In riveting detail, and with a crime victim's compassion, John Walsh reveals the terrifying and unforgettable true tales inside the most chilling crimes-- and thrilling chases-- of our time. For the first time ever, John Walsh takes you behind the scenes of the groundbreaking show that has formed a unique partnership between the media, the public, and law enforcement-- a partnership responsible for stunning victories in the war against crime. In ten years, the show's viewers have helped put more than 500 fugitives behind bars-- including twelve who were on the FBI's Most Wanted list. They've been involved in the capture of criminals hiding in thirty countries and, most important to John Walsh, brought twenty-three missing children back home safely. In a true-crime book like no other, John takes you: Inside the criminal mind... Follow every step the fugitives took-- how they hid, how they survived-- and how they'd do anything to stay on the run. Inside the police investigations... Learn every secret twist and turn, uncover every clue, in the race-against-time manhunts for the fugitives. Inside the remarkable television show itself... On an all-access tour, discover how the cases are selected and reenacted, and how America's Most Wanted has survived for an incredible ten years. You'll be there when the switchboard lights up with viewer calls-- and learn how hotline operators make split-second decisions with enormous consequences for crime victims and criminals. And you'll be there for the thrilling takedowns, as law enforcement races to make an arrest. In "No Mercy", John includes the cases that he calls "the ones that mattered the most": EDDIE JAMES: One of the cases that outraged John Walsh most, and one he took personally. If he couldn't catch his own son's killer, he was determined this brutal child-killer wouldn't get away. ANDREW CUNANAN: The true story of how America's Most Wanted spotted him as a dangerous spree killer-- and nearly caught him-- before he killed Gianni Versace. John Walsh was the only journalist allowed inside the investigation; now, for the first time, he tells what really happened. POLLY KLAAS: In, a case so tragically like his own, John relives his own family's nightmare in a heartpounding race to find a missing child. You'll listen in on the tearful but inspiring meeting between John Walsh and Mark Klaas, the fathers of two children murdered in cold blood and mourned by a nation. John Walsh has struck a chord with Americans who are mad as hell and ready to fight back. It is for us-- and for all of our children-- that he has become an unstoppable force for justice; now, in "No Mercy", you can join the fight.


Terms of Sale
Subject to availability of items and verification by Seller of correct price and condition. Seller may, in his sole discretion, refuse to sell any item to any prospective buyer. Seller shall have the right to determine mode of payment and delivery which is normally by United States Post Office, at the expense of buyer and which requires a street address, not a P.O. Box number. Payment in advance is may be required for first time clients. We accept cash, money order and checks in US...