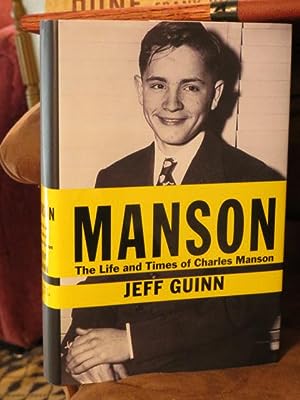 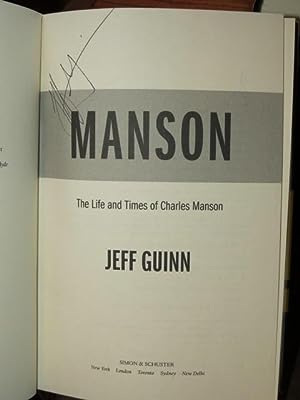 Hardback. Fine. First Edition. First Print. Signature only by author on the title page. The Life and Times of Charles Manson. Dust jacket is protected with a Mylar cover. Books are packed and shipped in boxes. Buchnummer des Verkäufers 6882

Reseña del editor: Based on new interviews with previously undiscovered relatives and filled with revelations and unpublished photographs, this is the most authoritative account of the life of Charles Manson.

The most authoritative account ever written of how an ordinary juvenile delinquent named Charles Manson became the notorious murderer whose crimes still shock and horrify us today.

More than forty years ago Charles Manson and his mostly female commune killed nine people, among them the pregnant actress Sharon Tate. It was the culmination of a criminal career that author Jeff Guinn traces back to Manson’s childhood. Guinn interviewed Manson’s sister and cousin, neither of whom had ever previously cooperated with an author. Childhood friends, cellmates, and even some members of the Manson Family have provided new information about Manson’s life. Guinn has made discoveries about the night of the Tate murders, answering unresolved questions, such as why one person on the property where the murders occurred was spared.

Manson puts the killer in the context of his times, the turbulent late sixties, an era of race riots and street protests when authority in all its forms was under siege. Guinn shows us how Manson created and refined his message to fit the times, persuading confused young women (and a few men) that he had the solutions to their problems. At the same time he used them to pursue his long-standing musical ambitions, relocating to Los Angeles in search of a recording contract. His frustrated ambitions, combined with his bizarre race-war obsession, would have lethal consequences as he convinced his followers to commit heinous murders on successive nights.

In addition to stunning revelations about Charles Manson, the book contains family photographs never before published.

1. Manson: The Life and Times of Charles Manson

2. Manson: The Life and Times of Charles Manson **SIGNED**

Buchbeschreibung Simon& Schuster, New York NY, 2013. Hardcover. Zustand: Near Fine. Zustand des Schutzumschlags: Fine. 1st Edition. With access to Manson's family, childhood friends and even members of his Killing Family, Guinn has produced the best biography and crime history of the 60s and 70s leading up to the nights of murder. This copy is in very good condition showing slight wear to the base of the cover. It is a second printing simply signed by Guinn on the title page with the bright, price-intact dustjacket in clear, mylar covering. The book will be carefully wrapped and boxed for safe shipping. Signed by Author(s). Bestandsnummer des Verkäufers 001271

3. Manson: The Life and Times of Charles Manson