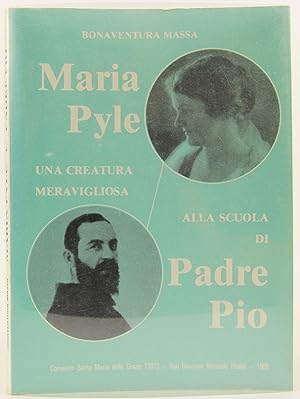 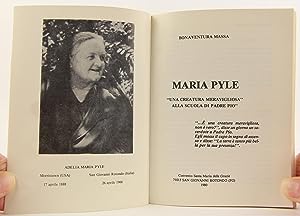 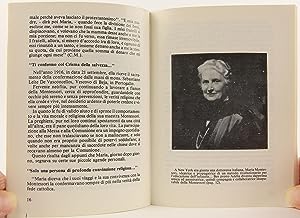 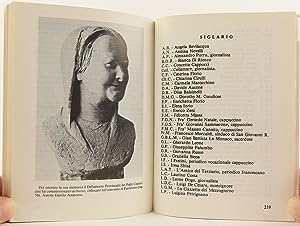 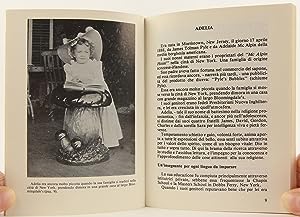 B016TV2ZBK In Italian. 1980 first edition Convento Santa Maria delle Grazie (Foggia, Italy), 4 7/8 x 6 1/2 inches tall paperbound in blue printed covers with clear plastic covers, as issued, 229 pp. Moderate soiling and abrasions to the clear plastic covers, which have done a nice job protected the paperback's covers. Apart from creasing to a few page tips, a very good copy - clean, bright and unmarked - of this scarce first edition issue. OCLC has no listings. ~SP41~ Adelia Maria McAlpin Pyle (1888 - 1968) for more than four decades was a fixture at San Giovanni Rotondo. Born at her parents' town house in Manhattan, she was from a wealthy Protestant and socially prominent family. Baptized at a Presbyterian church of which her mother was member, later she was instructed in the Catholic faith while in Spain by a Jesuit Father. She was conditionally baptized again. The ceremony was performed by a Capuchin friar, and she assumed the baptismal name of Maria. Maria was fluent in Italian, Spanish and German. In 1912 she met the educator Maria Montessori and become her interpreter. In 1923 Maria and her friend Rina d'Ergin Caterinici has spent the summer in Capri with Maria Montessori. Rina asked Maria to accompany her to San Giovanni Rotondo. On October 2, 1923, they left Capri, sailed to Naples, took a train to Foggia, and a bus to San Giovanni Rotondo. Born only a year after Padre Pio, her origins were in total contrast to Padre Pio's humble and poor beginnings. She wrote about the first encounter with Padre Pio: 'We just looked at each other at first, then I fell to my knees and said: 'Father.' He placed his wounded hand on my head and said: 'My child, stop travelling around. Stay here.' Mary returned briefly to Montessori, and after accompanying her to Holland and England, she went back to Padre Pio with Montessori. When they were about to leave she cried out: 'I can't. I feel paralyzed, as though someone had nailed my feet to the ground.' So Montessori took the bus for Rome alone, and had Mary's possessions sent to her. The two women never again met or spoke. Maria joined the Third Order of St. Francis in a ceremony led by Padre Pio on September 6, 1925. She obtained permission to wear the habit of the Order. She even slept in her habit. Like Saint Francis, she never refused to attend to the needs of the many destitute people who came to her door. She was always a friend to the poor. Mary's boundless generosity didn't stop there. She financed the building of a new church which, at Padre Pio's insistence, was dedicated to the Holy Family. With this, she changed the face of the little town of Pietrelcina, Padre Pio's birthplace. She also used her money to construct a much-needed friary and a seminary for the Capuchins. 'L'Americana,' as she was called by the people of San Giovanni Rotondo, would also build a house just below the high rise of the mountain, not far from the church. It would make it easier for her, especially in her later years, to attend daily mass and consult with her beloved Padre Pio. Her home became a center of hospitality, a joyful gathering place for pilgrims and for those who needed assistance. When the increasingly frail parents of Padre Pio needed assistance, Mary took them into her home beginning in the winter of 1929. It also made it convenient for Padre Pio to visit with his aging parents. Both of them eventually died in that house, comforted by the presence of their son. Buchnummer des Verkäufers SP41-1051-4477