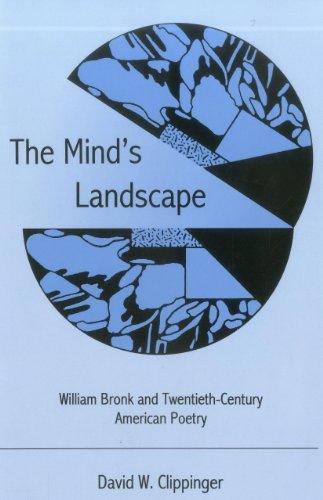 Throughout the latter half of the twentieth century, the poet William Bronk (1918-1999) was a significant voice in the American literary landscape. Even though he spent nearly all of his life in Hudson Falls, NY, Bronk was a vital presence in American poetry as evidenced by his connections to Robert Frost, Charles Olson, George Oppen, Robert Creeley, Wallace Stevens, Susan Howe, Rosemarie Waldrop, and others. "The Mind's Landscape" attempts to present a fresh perspective of twentieth-century literary history as seen through the lens of Bronk's life as a writer. It maps the webbing of affinities and differences of Bronk and these various poets as well as the network of communities, ideas, and poetics that have shaped twentieth-century American literature and life. Moreover, the text interrogates the ideational, poetic, and cultural shifts in American poetry throughout the twentieth century by drawing upon a range of poetry, essays, and letters. David W Clippinger is the Executive Director of Still Mountain as well as an education consultant for the Pennsylvania Humanities Council, and other state organizations.


ORDERS USUALLY SHIP WITHIN 2 BUSINESS DAYS. Shipping costs are based on books weighing 2.2 LB, or 1 KG. If your book order is heavy or oversized, we may contact you to let you know extra shipping is required.

Flat Rate INTERNATIONAL SHIPPING utilizes USPS Flat Rate Global Priority Envelopes, with the books within duly protected. In the case that your purchase does not fit into the mailer or exceeds the weight limit, we will contact you to request extra shipping for an alternate method.

Please contact us with any questions regarding the shipment of your package. We can track shipment & delivery promptly!