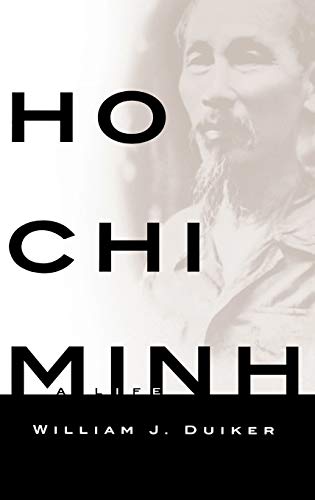 xix, [3], 695,[3] pages. Illustrations. Endpaper map. Maps. Notes. Index. Some wear and soiling to DJ. William J. Duiker is a former United States Foreign Service officer and was the Liberal Arts Professor Emeritus of East Asian Studies at Penn State University. His area of expertise is East Asia; while in the Foreign Service, he was stationed in Taiwan (the Republic of China), the Republic of (South) Vietnam, and Washington, D.C. After leaving the State Department in 1965, he received his Ph.D. degree in East Asian studies at Georgetown University. While at Penn State, Duiker served for ten years as Director of International Programs and as Chairman of the East Asian Studies Committee. He is the author of several books, including The Rise of Nationalism in Vietnam, Cultures in Collision: The Boxer Rebellion, Sacred War: Nationalism and Revolution in a Divided Vietnam, The Communist Road to Power in Vietnam, U.S. Containment Policy and the Conflict in Indochina, China and Vietnam: the Roots of Conflict, and Ho Chi Minh: A Life. The latter, published in 2000, was the first comprehensive biography of Ho Chi Minh using sources from Vietnam. This biography of Marxist revolutionary and political leader Ho Chi Minh chronicles his peasant background, his education--which included formative years in Paris--and his role as leader of the liberation movement to unify his people as a nation. In 1954, Ho became President of the Democratic Republic of Vietnam. The rest of his life, until 1969, was spent in a protracted war against South Vietnam and its ally, the United States of America. The magisterial and authoritative biography of one of the towering and mysterious figures of the twentieth century. Ho Chi Minh's epic life helped shape the twentieth century. But never before has he been the subject of a major biography. Now William Duiker has compiled an astonishing work of history that fills this immense void. A New York Times Notable Book and one of the Los Angeles Times Best Books of 2000. Derived from a review found on-line by Frances Fitzgerald. A retired professor of history who served as a United States foreign service officer in Saigon in the mid-1960's, Duiker spent over 20 years gleaning new information from interviews and from archives in Vietnam, China, Russia and the United States. Duiker's biography reminds us, the major problem for the Vietnamese was how to respond to the colonial power and the destruction of traditional society. Ho Chi Minh dedicated his life to this task. When Ho entered the prestigious National Academy in Hue in 1907, he was already a rebel. He became a founding member of the French Communist Party. Still writing as Nguyen the Patriot, he argued not only that Communism could be applied to Asia but that it was in keeping with Asian traditions based on ideas of community and social equality. According to Duiker's original and highly detailed account of this period, Ho single-mindedly pursued his own agenda, waiting out periods of adversity and seizing opportunities as they arose. In Canton, Ho published a journal, created the Vietnamese Revolutionary Youth League and set up a training institute that attracted students from all over Vietnam. In 1938 Ho's fortunes changed. Ho returned to head the Vietnamese movement, and with the Japanese invasion of Indochina, he created a nationalist front of workers and peasants for the independence of Vietnam, the Vietminh. In 1941 he re-entered the country he had not seen in 30 years to set up a guerrilla base in the mountains. In August 1945, three months after the Japanese deposed the Vichy French administration and just two days after the Japanese surrender to the Allies, the Vietminh moved into Hanoi, and amid cheering crowds Ho Chi Minh declared Vietnam an independent country. In 1954 the Vietminh won a decisive victory at Dien Bien Phu, but still the war dragged on. Mao Zedong had begun to provide the poorly equipped Vietminh with training and war matériel, and th. Bestandsnummer des Verkäufers 43142

The first major biography of the North Vietnam leader describes Ho Chi Minh's poverty-stricken youth; his expatriate years in the U.S., France, and the Soviet Union; his interactions with various world leaders, from Harry Truman to Mao Zedong; and his commitment to the Vietnamese revolution and renunification of Vietnam under Communist rule. 20,000 first printing.