Verwandte Artikel zu A Modest Proposal for Some Stress on Scholarship in... 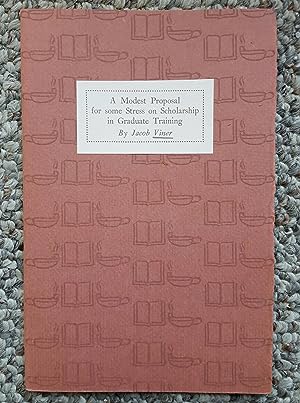 Abraham 'Bram' Pais's copy of the First Edition, with his pencil signature. 2 leaves, 24 pp. Original printed wrappers, original printed paper label on front wrapper. Near Fine. 'Viner's exhortation for serious scholarly treatment of economics is best expressed in his famous 1950 address, A Modest Proposal for Some Stress on Scholarship in Graduate Training' (History of Economic Thought Web site). 'Viner's wit as well as his humanistic approach to learning are illustrated in an address delivered at Brown University in 1950, titled 'A Modest Proposal for Some Stress on Scholarship in Graduate Training.' His 'modest proposal' was that graduate schools should assume more responsibility than they ordinarily do for scholarship as distinct from research. Although he admitted that graduate students could not become 'finished scholars as well as finished economists' in the short time available to them, he pointed out that graduate study is followed by another stage in education 'lasting to the end of one's life.' He suggested, therefore, that doctoral degrees should be granted, and accepted, somewhat in the spirit in which the University of Avignon handled the case of a capable but negligent candidate in 1650; 'after some hesitation it conferred the doctoral degree . sub spe future studii . 'in the hope of future study.' ' He did not plead on behalf of scholarship that it would save the world ('although this had conceivably happened in the past and might happen again') or that it would bring material rewards to the scholar or that it was an invariably exciting activity. All that he would plead, at least on this occasion, he said, was that once the taste for it has been aroused, 'it gives a sense of largeness even to one's small quests, and a sense of fullness even to the small answers to problems large or small which it yields, a sense which can never in any other way be attained, for which no other source of human gratification can, to the addict, be a satisfying substitute, which gains instead of loses in quality and quantity and in pleasure-yielding capacity by being shared with others -- and which, unlike golf, improves with age' ' (Alexander Leitch, A Princeton Companion, 1978). Buchnummer des Verkäufers 15709

Titel: A Modest Proposal for Some Stress on ...