Verwandte Artikel zu Morić Encomium: Or, the Praise of Folly. Made English...

Home Roterodamus, Desiderius Erasmus Morić Encomium: Or, the Praise of Folly. Made English from the ... 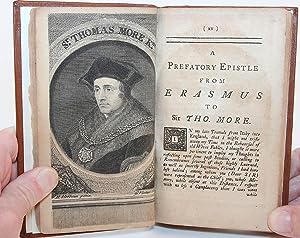 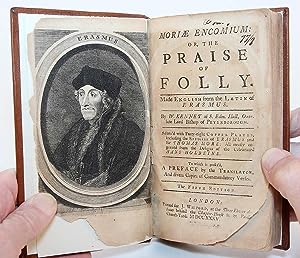 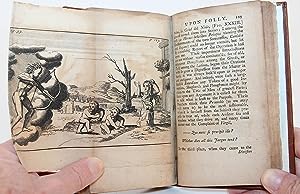 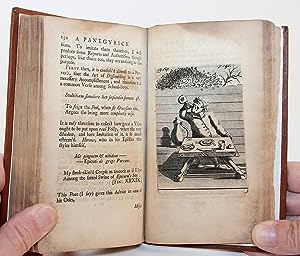 Morić Encomium: Or, the Praise of Folly. Made English from the Latin of Erasmus . Adorn'd with Forty-eight Copper Plates, Including the Effigies of Erasmus and Sir Thomas More: All Neatly Engraved From the Designs of the Celebrated Hans Holbeine

B00IPHICKU 1735 'Printed for J. Wilford, at the Three Flower-de-Luces behind the Chapter-House in St. Paul's Church-Yard' (London) 3 3/4 x 6 3/8 inches tall full leather bound, [20], vi [i.e. xx], 184, [4] pp. (pages xvii-xx misnumbered iii-vi). Despite a bit of damage, a complete copy which contains all 48 cooper-engraved plates from the designs of Hans Holbein the Younger, many folding. Lacking front endpaper (refreshed on rebind), with severe edge-chipping to the frontispiece portrait of Erasmus and title page, with most of the loss to margins (see images). Many of the plates have staining, creasing or minor chipping, especially the folding plates. Dampstaining throughout the last third of the book, especially pronounced in the final pages and index. Tearing, chipping and staining to rear free-endpaper. Altogether, a nice preservation of this superbly illustrated early edition of one of Erasmus' most important works. Reference: ESTC No. T140765. Scarce. ~KKK~ Desiderius Erasmus Roterodamus (1466 - 1536), known as Erasmus of Rotterdam, or simply Erasmus, was a Dutch Renaissance humanist, Catholic priest, social critic, teacher and theologian. Erasmus was a classical scholar who wrote in a pure Latin style. He was a proponent of religious toleration, and enjoyed the sobriquet 'Prince of the Humanists.' Using humanist techniques for working on texts, he prepared important new Latin and Greek editions of the New Testament which raised questions that would be influential in the Protestant Reformation and Catholic Counter-Reformation. He also wrote 'On Free Will,' 'Handbook of a Christian Knight' and many other works. This work, 'In Praise of Folly' was an essay written in Latin in 1509 and first printed in 1511. The essay was inspired by 'De Triumpho Stultitiae,' written by the Italian humanist Faustino Perisauli, born at Tredozio, near Forli. Erasmus revised and extended the work, which he originally wrote in the space of a week while sojourning with Sir Thomas More at More's estate in Bucklersbury. 'In Praise of Folly' is considered one of the most notable works of the Renaissance and played an important role in the beginnings of the Protestant Reformation. The translator of this edition, White Kennett (1660 - 1728) was an English bishop and antiquarian who, while an undergraduate at Oxford, published translations of several works of Erasmus, including this. In Praise of Folly influenced teaching of rhetoric during the later sixteenth century, and the art of adoxography or praise of worthless subjects became a popular exercise in Elizabethan grammar schools. A copy of the Basel edition of 1515/16 was illustrated with pen and ink drawings by Hans Holbein the Younger (1497 - 1543), from which the engravings in this edition were made. Buchnummer des Verkäufers KKK-0241-390

Titel: Morić Encomium: Or, the Praise of Folly. ...