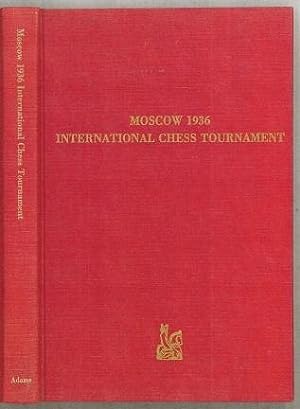 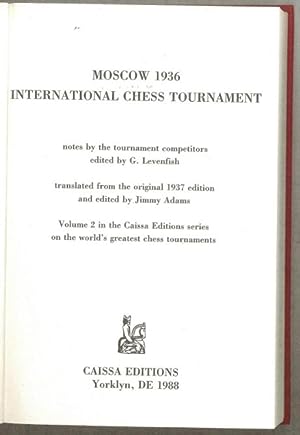 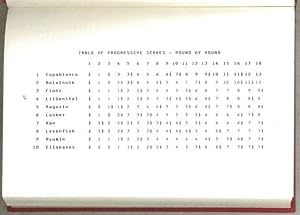 vi+245 pages with frontispiece, tables, plates and diagrams. Royal octavo (9 1/4" x 6") bound in original red cloth with gilt lettering to spine and cover. Translated by Jimmy Adams. Notes by the competitors. Volume 2 in the Caissa Editions on the world's greatest chess tournaments. First published in Moscow 1937 as Tretii Mezhdunarodnyi Shakmatnyi Turnir Moskva 1936 (Lusis: 1467) First American edition. The Moscow tournament, like its predecessors of 1925 and 1935, was held under government sponsorship, to test the strength of the leading Soviet players against top-class foreign grandmasters. It was the highly influential Chairman of the Chess section of the All-Union Council for Physical Culture, Nikolai Krylenko, who was the driving force behind the organization of these tournaments. Krylenko, a keen chess-player and editor of the Soviet chess magazine64, had been a Commissar for War in the first Bolshevik government, Commander-in-Chief of the Russian forces after the October Revolution, a public prosecutor for the revolutionary tribunals, and, by 1936, Commissar of Justice for the USSR. In 1938, he was himself arrested and executed during Stalin's purges, but his reputation was later rehabilitated and due recognition given to the great importance of his work for Soviet chess. The 1936 Moscow tournament was intended to be a test for the Soviet players - a double round event with five of the leading Soviet representatives due to play against five Western grandmasters. In fact only four Western grandmasters accepted invitations: Lasker, Capablanca, Flohr and Lilienthal. It had been hoped that the fifth would be an American (Reshevsky, Fine or Kashdan), but, as the event clashed with the US Championship, this proved impossible and the place was filled by the Austrian champion, Eliskases. The tournament ended in a great victory for the Cuban chess genius, Jose Raul Capablanca, a point ahead of the best Soviet player, Mikhail Botvinnik. In 1936, Capablanca seemed to regain his magnificent old form, which had been lacking since his loss of the world championship to Alekhine in 1927. Botvinnik's second may have disappointed his supporters, but there was no doubt about the class of his play: he finished 2 1/2 points ahead of Flohr, who was already looking for a title match with Alekhine. Three months later, Botvinnik tied with Capablanca for first at Nottingham, ahead of practically all the best players in the world, in one of the strongest tournaments ever held. The score for the ambitious Czech grandmaster, Salo Flohr, was ruined by four defeats - every one to a Soviet player, but Hungary's new star, Andrei Lilienthal, who had achieved world fame the previous year by defeating Capablanca with a brilliant queen sacrifice, confirmed his strength by finish in fourth place. Throughout the tournament, Vyacheslav Ragozin remained true to his bold, highly creative style, heavily influenced by Chigorin, and lived up to his reputation of being a "grandmaster killer", with wins against Flohr and Lasker. Rogozin soon became an important training partner for Botvinnik, and in the 50s, exploited his analytical powers to the full in winning the World Correspondence Chess Championship. The old warrior, former world champion Emanuel Lasker, put in a truly remarkable performance for a man in his late 60s. His philosophy of chess being a struggle make him very popular in Russia. With a style leaning towards the positional, Ilya Kan held his ground stubbornly and refused to be overawed by the quality of the opposition, even though he rather weakened in the second half. Over the years he enjoyed an active chess life, competing in ten Soviet championship finals, and had a particular interest in defense and counterattack, which was reflected in his writings and the variation of the Sicilian Defense which bears his name. The veteran Grigory Levenfish played consistently interesting chess and won two special prizes - for his finely conducted victory ove. Buchnummer des Verkäufers C0772

We are one of the American leaders of out of print chess literature. We also specialize in anthopology, Colonial America, exploration and discovery. We deal in select literature. We consign in our area of specialty and are always interested in buying quality material from single titles to entire collections. Trade offers gladly considered. We have a large selection of rare and collectable chess literature and ephemera. We are exhibitors at both the Texas book fairs in Arlington in November and Austin in January.


All subject to prior sale, returns accepted within 10 days from posted date if not as described. Payment: Master Card/Visa/Discover/AMEX or personal check.