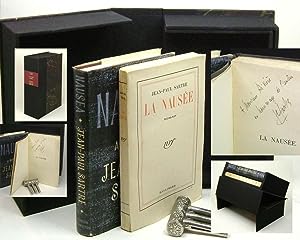 Paris: Gallimard, 1938. First Edition. Hardcover. " L a n a u s é e . . . c ' e s t m o i . " Sartre, Jean-Paul. LA NAUSÉE [Nausea]. Paris: Gallimard, [1938]. 8vo., original publishers wrappers, 223pp. First Edition Advance Review Copy with "S.P." on the lower front cover. A near fine splendid example especially for a "Service de Presse" copy. Sartre's much sought after First Book. His Presentation Copy, inscribed in dark blue fountain pen on the second blank page; "A Monsieurs Rivičre / en homage de l'auteur / JP Sartre". An exceptional copy of this cornerstone work of existentialism. Connolly, The Modern Movement, #84. With, Sartre, Jean-Paul. NAUSEA. London: Hamish Hamilton, 1962. hardbound. 8vo., 238pp. A near fine copy in dustwrapper designed by Patricia Davey. First Edition Thus translated by Lloyd Alexander, originally published in 1949 under the title "The Diary of Antoine Roquentin". Custom TBCL collector's clamshell case with compartments for both books in fine condition. "Nobody is better qualified than the commercial traveller over there to sell Swan toothpaste. Nobody is better qualified than that interesting young man to fumble about under his neighbour's skirts. And I am among them and if they look at me they must think that nobody is better qualified than I to do what I do. But I know. I don't look very important but I know that I exist and that they exist. And if I knew the art of convincing people, I should go and sit down next to that handsome white-haired gentleman and I should explain to him what existence is. The thought of the look which would come on to his face if I did makes me burst out laughing." The rationality & solidity of this world, Roquentin thinks, is a veneer. "Nausea (orig. French La Nausée) is an epistolary novel by the existentialist philosopher Jean-Paul Sartre, published in 1938 and written while he was teaching at the lycée of Le Havre. This is Sartre's first novel and one of his best-known. The novel concerns a dejected historian in a town similar to Le Havre, who becomes convinced that inanimate objects and situations encroach on his ability to define himself, on his intellectual and spiritual freedom, evoking in the protagonist a sense of nausea. It is widely considered one of the canonical works of existentialism. Sartre was awarded (but declined) the Nobel Prize for literature in 1964. They recognized him "for his work which, rich in ideas and filled with the spirit of freedom and the quest for truth, has exerted a far-reaching influence on our age." He was one of the few people ever to have declined the award, referring to it as merely a function of a bourgeois institution. In her La Force de l'âge (The Prime of Life - 1960), French writer Simone de Beauvoir claims that La Nausée grants consciousness a remarkable independence and gives reality the full weight of its sense. It has been translated into English at least twice; by Lloyd Alexander as "The Diary of Antoine Roquentin" (John Lehmann, 1949) and by Robert Baldick as "Nausea" (Penguin Books, 1965)". - Wikipedia. Buchnummer des Verkäufers 30935

TBCL aspires to offer the rapidly expanding and better connected modern book collecting world a focus on exemplary copies of important books. Every effort is made to obtain 'special' copies with a focus on unique examples - signed material and noteworthy inscribed presentation and association copies. Our areas of interest are very broad based extending from the origins of the printed word through to the moderns.


On ABE, we accept Mastercard, Visa AMEX, Discover, checks or Paypal, whichever
is most convenient for customers. Call us toll free: 1-888-863-BOOK or email us
at: info@tbclrarebooks.com for any inquiries or to confirm availability. All
dustjackets are in archival mylar covers, & books are packed carefully for
shipping. We guarantee the condition of every book as it's described on the
Abebooks web sites. If you're dissatisfied with your purchase (Incorrect
Book/Not as Described/Damaged), books in...


Shipping From Montreal, Canada & New York, 12914. Orders ship within 3-4 business
days. Shipping costs are based on books weighing 2.2 LB, or 1 KG. If your book
order is heavy or oversized, we may contact you to let you know extra shipping is
required.