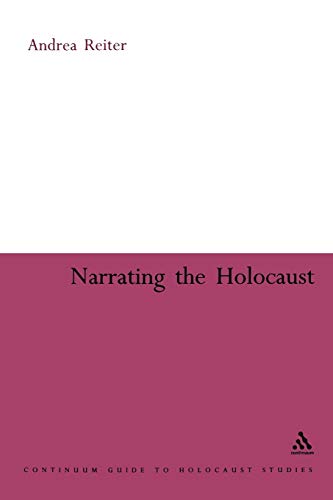 "In Narrating the Holocaust, Andrea Reiter breaks ground in two ways. First, she focuses on a wide range of testimonies written by survivors, most of which have not been available to a general, English-speaking audience, and which would not be conventionally classified as 'literature' of any sort, and subjects them to literary analysis, rather than dealing with them as historical documents. Second, she classifies these works systematically according to the different 'linguistic devices' and generic strategies that they employ." - David Brauner "Narrating the Holocaust thus offers considerable insight into texts that are not well known, particularly to English readers." - Adrienne Kertzer, The European Legacy--Sanford Lakoff "Narrating the Holocaust is the kind of initiatory work that someone had to write, and for that, we should thank the author...I believe it is important that someone has been willing to treat Holocaust narratives as something other than sacred texts. To construct a means whereby we can develop a rhetorical analysis of "non-literary" texts establishes a beginning for our understanding these narratives in a context that is more than theological, historical, psychological, or philosophical. As such, this book should prove a welcome addition to the libraries of all students of Holocaust literature." - Michael J. Hoffman, H-Net Reviews, March 2002--Sanford Lakoff "H-Net: Humanities and Social Science Reviews Online "


Orders usually ship within 2 business days. Shipping costs are based on books weighing 1.6 LB, or 750gms. If your book order is heavy or oversized, we may contact you to let you know extra shipping is required.