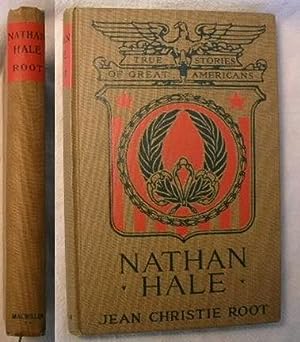 Buchbeschreibung CreateSpace Independent Publishing Platform. Paperback. Zustand: GOOD. Spine creases, wear to binding and pages from reading. May contain limited notes, underlining or highlighting that does affect the text. Possible ex library copy, will have the markings and stickers associated from the library. Accessories such as CD, codes, toys, may not be included. Bestandsnummer des Verkäufers 3231288189

Buchbeschreibung Createspace Independent Publishing Platform, United States, 2015. Paperback. Zustand: New. Language: English. Brand new Book. Nathan Hale, by Jean Christie Root, is a classic American Revolutionary War biography. It is today a recognized fact that no life worthy of our reverence, or even a life calculated to awaken our fear, is the result of accident. Whatever may be the character, its basis has been the result of long-developing causes. This Nathan Hale biography well illustrates. He was born at a time and under influences that were sure to develop the best qualities in him. Nathan Hale was an immediate descendant of the best of the Puritans on both sides of the sea. Nathan Hale (June 6, 1755 - September 22, 1776) was an American soldier and spy for the Continental Army during the American Revolutionary War. He volunteered for an intelligence-gathering mission in New York City but was captured by the British and executed. Hale has long been considered an American hero and, in 1985, he was officially designated the state hero of Connecticut. Nathan Hale was born in Coventry, Connecticut, in 1755 to Richard Hale and Elizabeth Strong. In 1768, when he was fourteen years old, he was sent with his brother Enoch, who was sixteen, to Yale College. Nathan was a classmate of fellow patriot spy Benjamin Tallmadge.[2] The Hale brothers belonged to the Linonian Society of Yale, which debated topics in astronomy, mathematics, literature, and the ethics of slavery. Nathan graduated with first-class honors in 1773 at age 18 and became a teacher, first in East Haddam and later in New London. After the Revolutionary War began in 1775, he joined a Connecticut militia and was elected first lieutenant within five months. His militia unit participated in the Siege of Boston, but Hale remained behind. It has been suggested that he was unsure as to whether he wanted to fight, or whether he was hindered because his teaching contract in New London did not expire until several months later, in July 1775. On July 4, 1775, Hale received a letter from his classmate and friend Benjamin Tallmadge, who had gone to Boston to see the siege for himself. He wrote to Hale, "Was I in your condition, I think the more extensive service would be my choice. Our holy Religion, the honor of our God, a glorious country, & a happy constitution is what we have to defend."Tallmadge's letter was so inspiring that, several days later, Hale accepted a commission as first lieutenant in the 7th Connecticut Regiment under Colonel Charles Webb of Stamford. In the following spring, the army moved to Manhattan Island to prevent the British from taking over New York City. In September, General Washington was desperate to determine the location of the imminent British invasion of Manhattan Island. To that end, Washington needed a spy behind enemy lines, and Hale was the only volunteer. The Battle of Long Island led to British victory and the capture of New York City via a flanking move from Staten Island across Long Island. Hale volunteered on September 8, 1776, to go behind enemy lines and report on British troop movements. Nathan Hale was ferried across on September 12. It was an act of spying that was immediately punishable by death and posed a great risk to Hale. During his mission, New York City (then the area at the southern tip of Manhattan around Wall Street) fell to British forces on September 15 and Washington was forced to retreat to the island's north in Harlem Heights (what is now Morningside Heights).[6] On September 21, a quarter of the lower portion of Manhattan burned in the Great New York Fire of 1776. The fire was later widely thought to have been started by American saboteurs to keep the city from falling into British hands, [7] though Washington and the Congress had already denied this idea. It has also been speculated that the fire was the work of British soldiers acting without orders. In the fire's aftermath, more than 200 American partisans were rounded up by the British. Bestandsnummer des Verkäufers APC9781508673118

Buchbeschreibung Paperback. Zustand: Used: Good. BC28 Book is in good condition with normal wear. Clean. All pages are in tact and clean. Ship same day EVERYDAY - SEVEN DAYS A WEEK. Please allow 2-7 days from USA. Book may have signs of shelf wear (Dust). ORDER with CONFIDENCE. Brouhaha, Inc. is committed to providing each customer with the highest standard of customer service. Bestandsnummer des Verkäufers KA-J5BM-PVZF

Buchbeschreibung BiblioLife, United States, 2009. Paperback. Zustand: New. Language: English . Brand New Book ***** Print on Demand *****.This is a pre-1923 historical reproduction that was curated for quality. Quality assurance was conducted on each of these books in an attempt to remove books with imperfections introduced by the digitization process. Though we have made best efforts - the books may have occasional errors that do not impede the reading experience. We believe this work is culturally important and have elected to bring the book back into print as part of our continuing commitment to the preservation of printed works worldwide. ***** Print on Demand *****. Bestandsnummer des Verkäufers AAV9781103524945