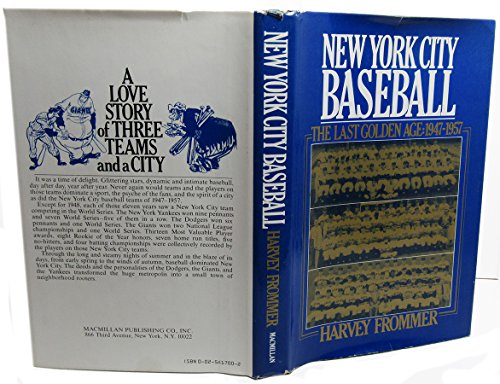 xi, [3], 219, [5] pages. Illustrations. Appendices. Miscellaneous Statistics. Dr. Harvey Frommer received his Ph.D. from New York University. Professor Emeritus, at CUNY where he taught writing for many years, the prolific author was cited by the Congressional Record and the New York State Legislature as a sports historian and journalist. His forty-one sports books include autobiographies of sports legends Nolan Ryan, Red Holzman and Tony Dorsett, the classics "Shoeless Joe and Ragtime Baseball," "New York City Baseball: 1947-1957," "The New York Yankee Encyclopedia," "A Yankee Century," "Red Sox vs. Yankees: The Great Rivalry", and "Five O'clock Lightning: The 1927 Yankees." His "REMEMBERING YANKEE STADIUM" was published to acclaim in 2008. Together with his wife Myrna Katz Frommer, he has written the acclaimed oral histories "It Happened in the Catskills," "It Happened in Brooklyn," Growing Up Jewish in America," "It Happened on Broadway" and "It Happened in Manhattan." In the heady days after World War II, the nation was ready for excitement and heroes, and a city New York was eager for entertainment. Baseball provided the heroes, and the Yankees, the Giants, and the Dodgers with their rivalries, their successes, their stars provided the show. New York City Baseball recaptures the extraordinary decade of 1947-1957, when the three New York teams were the uncrowned kings of the city. In those ten years, Casey Stengel s Bronx Bombers went to the World Series seven times; Joltin' Joe DiMaggio stepped gracefully aside to make room for a young slugger named Mickey Mantle; Bobby Thomson hit the shot heard round the world; and the Brooklyn Dodgers achieved the impossible by beating the Yankees in the 1955 World Series. Over the decade, the teams averaged an astounding 90 wins against 63 losses a season, making it, according to The New York Times, a helluva ten years. Bestandsnummer des Verkäufers 74100