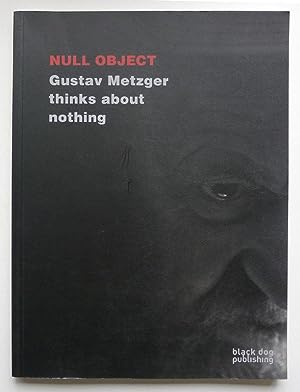 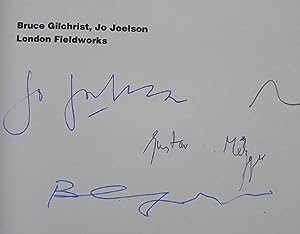 8vo. Card covers. 96pp. 68 colour and b/w illusts. Signed by Metzger, Joelson and Gilchrist on the title-page. Metzger was born to Polish-Jewish parents in Nuremberg, Germany in 1926 and came to Britain in 1939 as a refugee under the auspices of the Refugee Children Movement. He has been stateless since the 1940s. he received a Grant from the Jewish Comminity in the U.K to study at the Royal Academy of Fine Arts in Antwerp between 1948 and 1949. It is with an experience of twentieth century society's destructive capabilities that led Metzger to a concentrated 'formulation of what destruction is and what it might be in relation to art.'Metzger is known as a leading exponent of the Auto-Destructive Art] and the Art Strike movements.He was also active in the Committee of 100 and took part in their early anti-nuclear base campaigns of direct action and occupation.In 1959, he published the first auto-destructive manifesto Auto-Destructive Art. This was given as a lecture to the Architecture Association in 1964, which was taken over by students as an artistic 'Happening'.In 1962, he participated in the Festival of Misfits organised by members of the Fluxus group, at Gallery One, London. His proposal to exhibit the front pages of the Daily Mirror covering the Cuban Missile Crisis was rejected by the organisers Robert Filliou and Daniel Spoerri.In 2005, he selected EASTinternational which he proclaimed to be "The art exhibition without the art.".[4]Throughout the 60 years that Metzger has been producing politically engaged works, he has incorporated materials ranging from trash to old newspapers, liquid crystals to industrial materials, and even acid. "[5]From September 29, 2009 through November 8, 2009, the Serpentine Gallery in London features the most extensive exhibition ever in the U.K. of Gustav Metzger s work. The exhibit includes the installation Flailing Trees, which consists of 15 upturned willow trees embedded in a block of concrete, symbolizing a world turned upside down by global warming. He feels that artists face a threat that global warming will lead to the extinction of things in nature, which they rely on because nature is such a big inspiration to artists. Metzger stated that "artists have a special part to play in opposing extinction, if only on a theoretical, intellectual basis." "[5]Metzger has continued to make challenging art works around the world. He currently lives and works in East London. Buchnummer des Verkäufers 019301

Roe and Moore are specialists in etchings, drawings and lithographs by modern British artists and rare art books, some with original graphics. Our shop in Bloomsbury is now closed and not all our stock is listed on this site. However, we do have an extensive range of books and rare exhibition catalogues of 20th century British artists on abe.com.