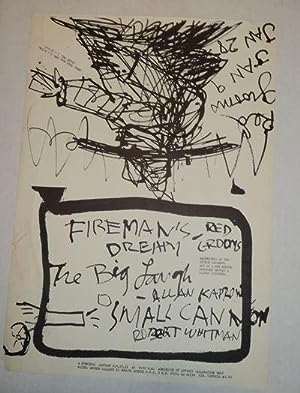 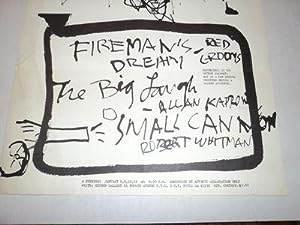 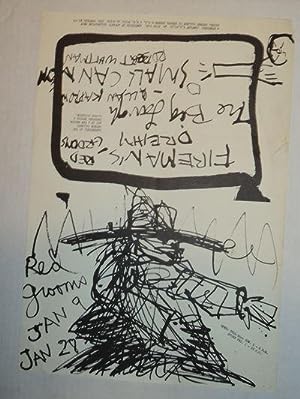 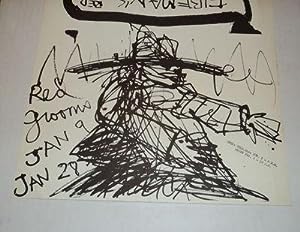 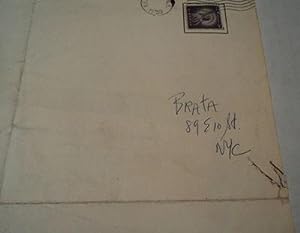 - An original 17 inch high by 12 inch wide black & white flyer designed and illustrated by Red Grooms for the series of Happenings which took place at Reuben Gallery from January 8 through the 11th, 1960 and the overlapping exhibition of Red Grooms' works displayed at the gallery from January 9 through the 28th of that year. One half of the flyer lists the 3 performance art events scheduled for the evenings of January 8th through the 11th, boldly titled in facsimile of the artist's handwriting within a heavy black frame. Illustrated with what appears to be an arm reaching out for a ball at the left of the frame. "Happenings at the Reuben Gallery: Art in a New Medium produced before a seated audience" is additionally printed in type within the frame, and the dates and relevant information is printed along the bottom: "4 evenings January 8.9.10, 11 at 8:30 p.m. Admission by Advance Reservation Only / Write: Reuben Gallery 61 Fourth Avenue N.Y.C. 3 N.Y. Phone OR-41136 min. contrib. $1.50". Depicted upside down on the other half of the sheet is a bold black & white illustration of one of Red Groom's paintings of a man in a wide brimmed hat reaching out with his hand, the whole heavily scribbled out with bold black lines in Grooms inimitable style with the words "Red Grooms Jan 9 - Jan 28" boldly written at left of the image. The sheet is folded twice horizontally and once vertically for mailing. It is addressed in ink to "Brata" on the verso with Reuben Gallery's return address and a 1959 postmarked US postage stamp. The flyer is soiled with creases to the edges, several pinholes to two of the corners, a short tear along the edge of one fold and some damage and rough short tears to the left edge not affecting the text. A bold powerful event flyer. The event flyer advertised performances of Red Grooms' "Fireman's Dream" (later titled "The Magic Train Ride"), Allan Kaprow's "The Big Laugh", and Robert Whitman's "Small Cannon" in addition to an exhibition of Red Grooms' art work.A rare event flyer for an early "happening", a term coined by Allan Kaprow to describe these early performance art events.The art exhibit held in conjunction with the performances was Red Grooms first solo show.The flyer is addressed to the Brata gallery, located at 89 E. 10th street, which was itself significant as one of the 10th Street galleries that operated co-operatively in Manhattan's East Village. These artist run galleries operated on low budgets were the avant-garde alternative to the conservative 57th Street galleries.In its short life (October 1959 to April 1961), the Reuben Gallery, founded by Anita Reuben as "an outpost for human image in a sea of Abstract Expressionism", helped launch the careers of many of the important artists of the period. George Brecht, Jim Dine, Claes Oldenburg, and George Segal were among the many modern artists whose works were exhibited by the Reuben.In a 2012 article published by The New York Times about the Pace Gallery's exhibition entitled "Happenings: New York, 1958-1963" Red Grooms states that "All of us were painters or makers of something. I guess we all had a knack for doing something theatrical, and there was a certain sort of movement in painting at that time. Pollock was a prime influence." and further describes his work "I was enamored with all sorts of theater--circuses, carnivals, ice shows, things on television. In high school assemblies I would do skits; I'd come out in a tutu and do a pratfall. So my Happenings were physical as well. In all of them I played this character called the Pasty Man, who would come out from behind the curtain with this candle."RARE. [No copies found in WorldCat]. Bestandsnummer des Verkäufers 31441