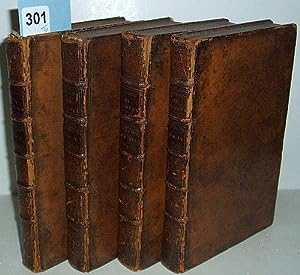 Next-to-last (and probably still best) edition of Maupertuis's Collected Works, the final one published in his lifetime. Frontispiece, 2 leaves, vi, 1 leaf, xxviii, 309 pp, [1, errata], 1 leaf [contents]; 2 leaves, iv, 399 pp, 3 leaves [contents, errata]; 2 leaves, vii, [1, errata], 468 pp, 2 leaves [contents]; 2 leaves, viii, 6 leaves [contents, Avertissement], 346 pp, 2 leaves [Approbation] pp. Contemporary full leather. Joints rubbed, a bit worn in some spots, hinges starting. Else a Very Good set. Reprints (in Vol. II) Garrison-Morton 215.2, Vénus physique [1745]. Houzeau & Lancaster (no. 3481) lists a number of editions of Maupertuis's Ouevres, both in two and four volumes and both 8vo and 4to, but the actual existence of each of them remains uncertain. Only one was published after the one offered here, posthumously, also in Lyon and in four volumes, in 1768. The other editions listed by Houzeau & Lancaster are: quarto, Dresden, 1752; 4 vol., 8vo, Paris, 1752; 2 vol., 8vo, Berlin & Lyon, 1753; 4 vol., quarto, Lyon, 1754; 4 vol., 8vo, Lyon, 1754. The edition offered here, the first one to include a portrait of Maupertuis (curious in that Bentley Glass describes him as 'very short. His body was always in motion; he had numerous tics. He was careless of his apparel'), is the only one cited by Glass in his D.S.B. article on Maupertuis (Vol. IX, pp. 186-9). Vénus physique 'was an enlarged and more fully analyzed argument against the then-dominant biological theory of the preformation of the embryo. Maupertuis argued convincingly that the embryo could not be preformed, either in the egg or in the animalcule (spermatozoon), since hereditary characteristics could be passed down equally through the male or the female parent. He rejected the vitalistic notion that some 'essence' from one of the parents could affect the preformed fetus in the other parent, or that maternal impressions could mold the characteristics of the offspring. A strict mechanist, although a believer in the epigenetic view of the origin of the embryo, he looked for some corporeal contribution from each parent as a basis of heredity' (D.S.B. IX: 187). The 1768 edition cannot be much changed from the one offered here, for as Glass notes, Maupertuis 'departed again for France, a very sick man, in May 1756. Greatly distressed by the outbreak of the Seven Years' War, he decided to return home by way of Switzerland. He went to Toulouse, whence he set out again in May 1758. At Basel, too ill to proceed, he was received warmly by his old friend Johann Bernoulli. On 27 July 1759, before his wife could reach him, he died and was buried in Dornach' (p. 188). Buchnummer des Verkäufers 17151