Verwandte Artikel zu The Old Man and the Sea 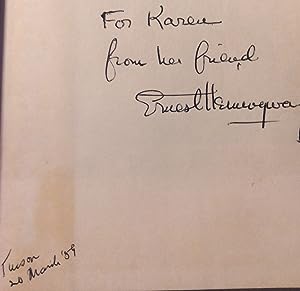 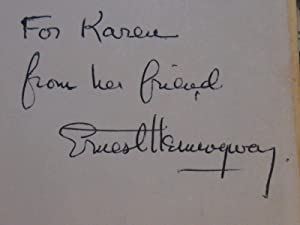 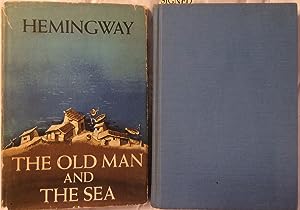 The Old Man and the Sea

A very good copy bound in finely woven blue cloth stamped brightly in silver on the spine with no flecking to the lettering. With rubbing and light wear to the extremities. This copy was published in 1958. A newspaper photo of Ernest and Mary Welsh Hemingway has been glued onto the second free endpaper and dated July 3, 1961, creating some offsetting. In a later dust jacket with the price of $3.00 and with the notice of the Pulitzer Prize at the top of the front flap. Heavy chipping and small pieces missing at the top of the spine ends and at the corners. This copy is inscribed in black ink on the front endpaper: "For Karen from her friend Ernest Hemingway." And dated: "Tucson 20 March '59" by the recipient. The recipient was Waldo Pierce's daughter, Karen, who has written a letter of provenance dated Sept. 6, 2007: "When I was 10 years old, Ernest Hemingway came to our house in Tucson, Arizona, to visit my father, Waldo Peirce. He signed a book for everyone in the family, and I got The Old Man and the Sea. Karen Peirce." Waldo Peirce (1884 1970) was an American painter, born in Bangor, Maine. Peirce was both a prominent painter and a well-known character. He was sometimes called "the American Renoir". A long-time friend of Ernest Hemingway, of whom he painted the cover picture for Time magazine in 1937, he was once called "the Ernest Hemingway of American painters." To which he replied, "They'll never call Ernest Hemingway the Waldo Peirce of American writers." In a letter written in the mid-1930s, Ernest Hemingway described a visit by Peirce to his home in Key West, Florida: "Waldo is here with his kids like untrained hyenas and him as domesticated as a cow. Lives only for the children and with the time he puts on them they should have good manners and be well trained, but instead they never obey, destroy everything, don't even answer when spoken to, and he is like an old hen with a litter of ape hyenas. I doubt if he will go out in the boat while he is here. Can't leave the children. They have a nurse and a housekeeper too, but he is only really happy when trying to paint with one setting fire to his beard and the other rubbing mashed potato into his canvasses. That represents fatherhood." (Wikipedia). Buchnummer des Verkäufers 283

Titel: The Old Man and the Sea

We maintain a stock of 10,000 modern first editions ranging from Melville to Updike. We specialize in first editions by Mark Twain, Jack London, Ernest Hemingway, F. Scott Fitzgerald, John Steinbeck, P.G. Wodehouse, and John Updike as well as important works of modern detective fiction by Robert B. Parker and Sue Grafton. We are open by appointment only and do most of our business via the internet and by mail.


All prices are net.
We accept checks, money orders, and PayPal, prior to shipping.
All books are returnable within 5 business days, provided you call to confirm and return them in their
original condition.
We guarantee all first editions and signatures as authentic.

Please add $7.50 for postage (US Priority) for the first book and $2.50 for each subsequent book
ordered; if you prefer UPS, please include a street or location address. Special or out of country orders
will require additional postag...