Verwandte Artikel zu Omnibus of North Bengal : The History and Culture of...

Home edited by Anita Bagchi and Dahlia Bhattacharya Omnibus of North Bengal : The History and Culture of the Hills ...
Beispielbild für diese ISBN 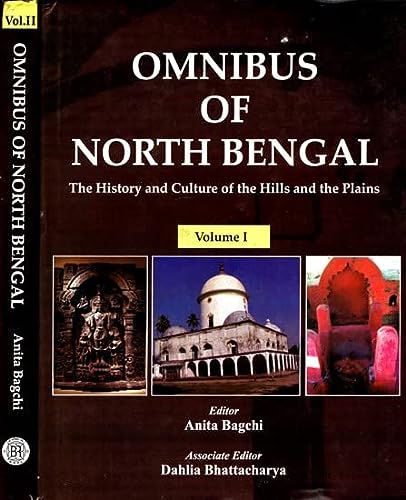 Omnibus of North Bengal : The History and Culture of the Hills and the Plains (2 Vols-Set)

Contents: Preface. Volume I : 1. Introduction/Anita Bagchi. Society and Culture: 2. Historicity of the name North Bengal or Uttarbanga: A study on the evolution of an identity/Ananda Gopal Ghosh. 3. Indigenous population of North Bengal: A contemporary contemplation/Pinak Tarafdar. 4. Social history of North Bengal: ancient period/Chitrarekha Gupta. 5. Himalayan Bon and Lamaistic Buddhism: A contested space of religion and culture/Sudash Lama. 6. The dynamics of changing tribal population in the Barind Bhumi of Malda (Late 19th and early 20th century)/Varun Kumar Roy. 7. Situating the Joshmanis in the socio-religious history of Darjeeling and her adjuncts: a study between late 18th and early 20th century/Pramod Chhetri. 8. Christian Missionaries and the development of education in Darjeeling and Terai region in the nineteenth and early twentieth century: the story of liaison between evangelism and imperialism/Chhanda Chakraborty. 9. The Rajbanshi Kshatriya Movement: a study of caste mobilisation in North Bengal during the colonial times/Dahlia Bhattacharya. 10. The administrative and constitutional developments of the Princely State of Cooch Behar (1773-1949): A move towards social Welfare and People s Participation/Ratna Roy Sanyal. 11. A synergy between popular history and contemporary culture: the Cooch Behr State in perspective (1773-1950)/Prajna Paramita Sarkar. 12. Role of the princely state of Cooch Behar in combating epidemic recurrence of Cholera: a conflict between science and superstition in the state/Srabani Ghosh. Volume II: Economy and Communication: 13. The Chronicle of the routes of trade and commerce: medieval Northern Bengal and its vicinity/Malaysankar Bhattacharya. 14. Across the peaks and though the passes-Tibetans in the Hills of Darjeeling/Karubaki Datta. 15. Looking into the past through the Darjeeling Himalayan Railway/Bhawna Rai. 16. Intrusion of colonial authority in the management of Jalpaiguri District Village Markets (Hats) 1865-1947/Shesadri Prosad Bose. Reaction and Movements: 17. Jute cultivation and agrarian unrest in colonial and post-colonial North Bengal/Sujit Ghosh. 18. Nationalist politics and the emergence of the left force in Maldah: strategy and struggle between 1935 and 1947/Ashim Kumar Sarkar. 19. Naxalbari: Its significance and impact on Indian politics, society, historical study and culture/Amit Bhattacharyya. Art and Architecture: 20. A survey of Brahmanical sculptures in North Bengal/Mandira Bhattacharya. 21. Revisiting the art and architecture of the Siva Temples of Jalpaiguri and Cooch Behar in North Bengal and Beyond/Anita Bagchi. Plates. Omnibus of North Bengal explores the historical dynamics covering a wide range of issue on society, polity, economy, movements and also art and architecture that had crystallized in the Northern part of Bengal, colloquially known as North Bengal at present. The book embodies twenty research articles. Peoples settlement patterns are generally conditioned by dictates of geography as well as of zonal linguistic groupings. Since the early period the archaeological remains at Mahasthangarh, Bangarh, Jagaddal Mahavihar, Jagajjivanpur Mahavihar, the ruins of Asuragarh have revealed horizontal extension of urban or semi urban settlement and justifiably have curved a niche in academic discourse. Simultaneous attention is needed to explore the historical process that has been going on and on through the ages in piedmont North Bengal. This region is a meeting ground of different Indo-Mongoloid groups and other ethnic people. The Tibeto-Burman speech speaking people are generally known as the Kiratas . The role played by the people inhabiting the foothills of the sub-Himalayan region bordered by Nepal, Tibet, Sikkim, Bhutan and others has been so long looked small. The Omnibus of North Bengal has tried to visualize the people and history of North- Bengal as a whole. (jacket). Buchnummer des Verkäufers 115871

Titel: Omnibus of North Bengal : The History and ...

A one stop shop for books from India. We can supply any title published in India by any publisher. We have an extensive annotated catalogue of books on the web. We have been supplying books from India to University Libraries, Art Museums, Botanical Gardens world wide for the past thirty years.


We check every book for page mistake before they are shipped out. We take a lot of pain in our packing so that the books reach their destination in mint condition.


Shipping costs includes insurance. Books lost in transit will be replaced immediately. Shipping costs are based on books weighing 2.2 LB, or 1 KG. If your book order is heavy or oversized, we may contact you to let you know if extra shipping is required.