Verwandte Artikel zu A PICTURESQUE TOUR ALONG THE RHINE 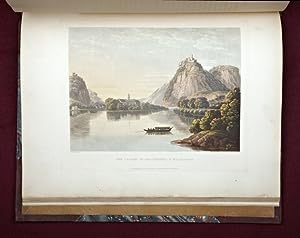 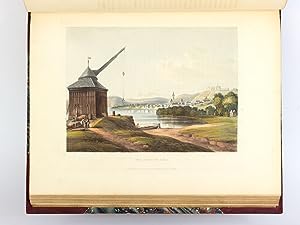 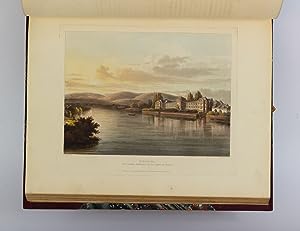 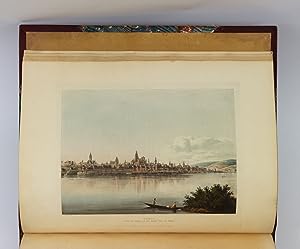 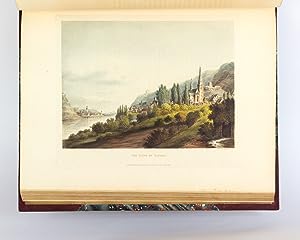 A PICTURESQUE TOUR ALONG THE RHINE

422 x 324 mm. (16 5/8 x 12 3/4"). sheets 407 x 318 mm. (16 x 12 1/2"). xiv, [ii], 178 pp.Translated from the German by John Black. FIRST EDITION IN ENGLISH, First Issue. ONE OF 50 LARGE PAPER COPIES. Excellent contemporary red half morocco over marbled boards by Charles Hering (stamp-signed on verso of front free endpaper), newly rebacked and recornered to style by Courtland Benson, wide raised bands and panels attractively gilt in scrolling designs, gilt titling, all edges gilt. 24 HAND-COLORED PLATES OF THE RHINE (plus one folding map), taken from the drawings of Christian Georg Schütz and engraved by Sutherland, Havell, and Bartlett. A Large Paper Copy. Front pastedown with armorial bookplate of "R G V"; front free endpaper with evidence of bookplate removal. Abbey "Travel" I, 217; Tooley 234. Offsetting onto tissue guards (indicating that they have done their job), one tissue guard missing (but no offsetting onto text in this case), isolated trivial thumbing, foxing, or rust spots, but A FINE AND ESPECIALLY DESIRABLE COPY, the beautifully restored binding unworn, the text and plates with only the most minor imperfections, and the margins of this special copy remarkably broad. This is one of Ackermann's major color plate books and apparently the first in his "Picturesque Tours" series, others of which explore the Seine, the Ganges, and the Thames. The book describes a trip down the Rhine on that part of the river generally considered most romantic and charming. The account contains not only topographical descriptions, but considerable historical information and details of popular traditions. The tone is frankly advocative, the book being written "with a view chiefly to the information of travellers of cultivated minds who may be induced to visit this interesting portion of Germany." The main appeal of the book for us today, of course, resides in the book's spacious and richly colored plates. The irresistibly scenic views seem to justify the book's claim that the region depicted is "a portion of heaven fallen down to earth." Our plates are early impressions, and, as in other contexts, size matters here: the sheets in our volume are 407 mm. tall, appreciably larger than most of the copies seen in auction records, which measure, on average, approximately 330 mm. (Abbey's untrimmed copy measured 425 mm., and a Large Paper Copy sold at Sotheby's in 2007 had sheets 402 mm. tall.) As the limitation would indicate, copies on Large Paper are very uncommonly seen, and our copy is beautiful, with especially well-preserved text and plates and an exceedingly handsome replica spine. FIRST EDITION IN ENGLISH, First Issue. ONE OF 50 LARGE PAPER COPIES. Buchnummer des Verkäufers ST12078

Titel: A PICTURESQUE TOUR ALONG THE RHINE


Payment: We accept checks, money orders, Visa, Master Card, American Express and wire transfers. If you are a first time customer, we wait for payment to be received before sending out your order.

Shipping: Shipping and insurance are extra. We usually ship USPS Priority, but other options available to the client including FedEx, or UPS.

Returns: Your satisfaction is unconditionally guaranteed. If you buy an item from us and discover that you are not satisfied with it, you may return it within 10...