Home Eisler, Colin. Introduction by B. B. Piotrovsky & V. A. Suslov Paintings in the Hermitage
Beispielbild für diese ISBN 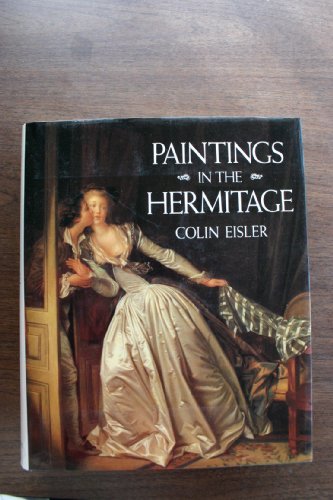 Paintings in the Hermitage

Eisler, Colin. Introduction by B. B. Piotrovsky & V. A. Suslov

4to, 653 pp., color plates throughout. Head and heel of spine and corners of boards bumped; a couple of small tears to cloth at top of rear board near crown; small faint dampstain to rear board; a few small specks and spots to covers, page edges and endpapers; stains to top edge. Interior clean, bright and unmarked. Jacket sunned, handled and edgeworn, with 3" piece missing at head of spine, tape-repair. NOTE: Large, heavy book, may require extra postage. Bestandsnummer des Verkäufers 17116

Titel: Paintings in the Hermitage

More than 750 works in this book include many of those acquired by Catherine the Great as well as hundreds of other added more recently. The book features paintings from 18th-and 19th-century France, with major canvases by Boucher, Fragonard, Watteau, Claude Lorrain, Hubert Robert, David Ingres, Courbet, Corot, the paintings of the Dutch and Flemish Baroque which include Rembrandt's "Return of the Prodigal Son" and his "Descent from the Cross", as well as examples of works by Hals, Rubens, Van Dyck and Jordaens. It includes works by Van Gogh, Gauguin, Cezanne, Picasso and Matisse. It also features works of the Italian Renaissance, Spanish paintings and paintings from England, Sweden, Switzerland, Belgium and the United States.


c.w.o. MC/Visa, Discover, PayPal, American Express. All books returnable
for any reason. Please notify before returning.
Shipping: $3.50 for first book, 1.50 for each additional.
$7.00 for U.S. priority mail. Inquire for shipping
outside U.S.


Orders usually ship within 2 business days. If your book order is heavy or oversized, we may contact you to let you know extra shipping is required.