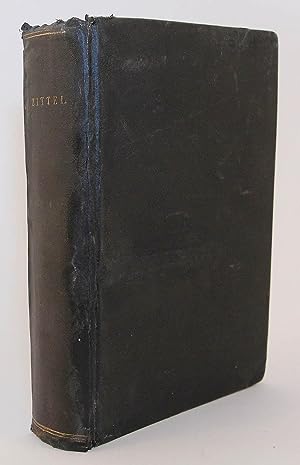 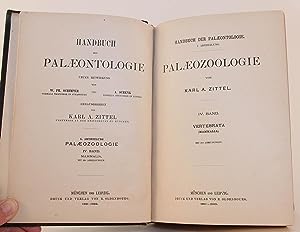 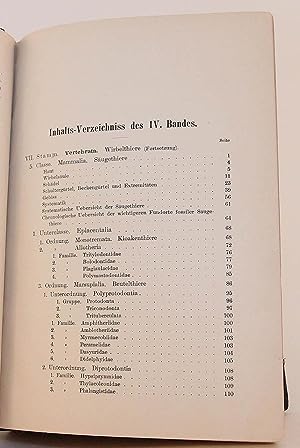 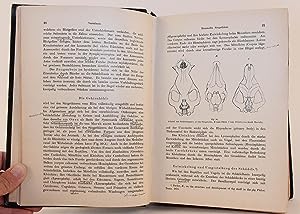 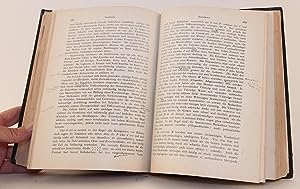 B004YR5M08 In German. 1891-1893 Druck und Verlag Von R. Oldenbourg (Munich, Germany) 6 5/8 x 9 1/2 inches tall x 1 3/4 inches thick black cloth hardbound, gilt lettering to spine, copiously illustrated with superb engravings, xi, 799 pp. A heavy book whose binding appears to have been repaired along the way. Rubbing, bumping, soiling and edgewear to covers. Prior owner name to front free-endpaper. Neat, unobtrusive, English annotation marginalia throughout by famed paleontologist J.L. Wortman. Slight age-toning to the paper. Otherwise, a very good copy of this important resource for vertebrate paleontologists and zoologists. Note that this is a heavy and oversized book, so additional postage will be required for international or priority orders - contact us for an exact shipping quote. ~RRR~ Association copy: The prior owner, Jacob L. Wortman (1856-1926), a native of Oregon, was well known as a naturalist and paleontologist. He left the University of Oregon, where his interest in geology began, in 1887. Before the age of 22, he had been assisting Charles Sternberg in the fossil beds of the John Day River country in eastern Oregon. Wortman went with Sternberg to Washington, DC in the early 1880s, where Wortman worked as a curator at the Army and Navy Medical Museum, then obtaining his medical degree at Georgetown University. He was recruited to work at the American Museum in New York, where he supervised the museum's paleontology field work for the next 8 years. Though he appears to have never practiced medicine, he was affectionately known to his colleagues as 'the doctor.' A brilliant collector, anatomical reconstructionist, and writer, Wortman was named assistant curator of vertebrate paleontology at the American Museum of Natural History under Henry Osborn. He was known as a warm and highly competent teacher, having produced definitive works in paleontology (see Orr and Orr, 1984) that remain classics. Paradoxically, at the peak of his success, he closed the book on his meteoric career following a series of frustrating administrative squabbles. He married and settled in Brownsville, Texas, where he spent the remainder of his life as a pharmacist and drug store owner. He refused to practice or even read of his former profession. Buchnummer des Verkäufers RRR-0541-644