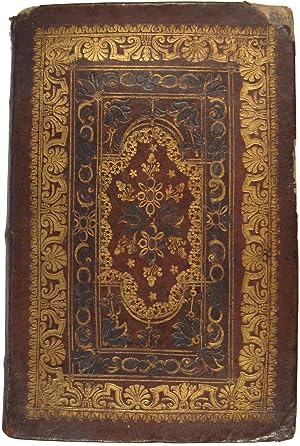 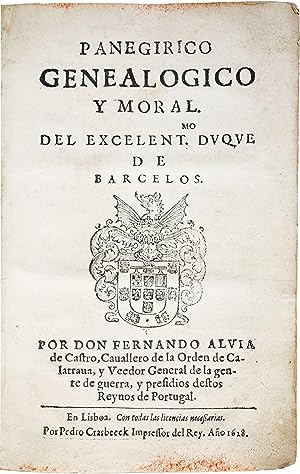 4°, old (late seventeenth or early eighteenth century [?]) calf (wear to corners, upper corner of front cover defective; head of spine somewhat defective), plain and almost flat spine, with sewing bands slightly visible, covers richly tooled in gilt (some gilding rubbed, and with some tooling painted but severely rubbed), text-block edges sprinkled red. Woodcut arms of the Duque de Barcelos on title, woodcut initials. Light dampstaining, mostly very small and limited to upper margins of a few leaves. In very good to fine condition, in an unusual binding. Ink inscription in upper outer corner of front free endleaf: "Custou-me 600 reis // 20/10/[17?]78." (4), 68 ll. *** Rare FIRST and ONLY EDITION of this important genealogy of two of Portugal's wealthiest and most powerful families: the noble family of Barcelos, and its offshoot, the royal family of Bragança, which was to rule Portugal continuously from 1640 until 1910, and Brazil from 1640 to 1889. In this work Alvia de Castro traces the lineage of the Condes de Barcelos (a title created in 1298) back to the early Christian kings of Castille and Navarre. He also describes the fortuitous unions which commingled Barcelos blood with that of the royal houses of Spain and Portugal: the third Conde de Barcelos, for instance, was the illegitimate son of D. Dinis; and the eighth Conde (and first Duque de Bragança) was the legitimized son of D. Joăo I.Alvia de Castro states in the dedication that he wrote this work "en muestras de mi inclinacion a su grandeça," and the Panegirico passed the scrutiny of the censors in Lisbon and Madrid. In hindsight, however, this is a rather subversive work: it justifies the claim of the author's patron, D. Joăo (1604-1658), Duque de Barcelos, to the Portuguese throne. The previous royal line had been extinguished upon the death of D. Sebastiăo at the disastrous battle of Alcácer Quibir in 1578, and Portugal was now under Spanish dominion. D. Joăo succeeded his father as eighth Duque de Bragança in 1630 and, in 1640, was proclaimed King Joăo IV of Portugal.Born in Logrońo, Alvia de Castro (1572-1640?), a knight of Calatrava, served as inspector-general of the Spanish royal armada and of Spanish naval and military forces in Portugal. While in Portugal he also published several other works, including a collection of military and political aphorisms (1621) and the Memorial y discurso politico por la muy noble, y muy leal ciudad de Logrońo (1633).*** Arouca C304. Innocęncio II, 267: without collation. Palau 10109. Simón Díaz V, 210: locating copies at the British Library, Hispanic Society, Vatican Library, Biblioteca Nacional, Madrid, and the Monasterio de San Miguel de la Cogolla. Sousa Viterbo, Literatura hespanhola em Portugal pp. 194-200 (calling for only 3 preliminary leaves). Maggs Bros., Spanish Literature (1927), 36. Monteverde 172. Azevedo-Samodăes 130. Ameal 93. Goldsmith A213. HSA p. 22. Salvá 3539. Jerez p. 7. Ticknor Catalog p. 11. Not in Palha. Grande enciclopédia II, 234; on the genealogies of the Barcelos and Bragança families, see IV, 219-20 and V, 9-14. Porbase locates five copies: four in the Biblioteca Nacional de Portugal (one of which lacks the title page and following preliminary leaf and is otherwise described as being in "mau estado"; another is described as being in "muito mau estado"), and one copy in the Biblioteca Geral da Universidade de Coimbra. CCPBE locates five copies: two in the Biblioteca Nacional de Espańa, and one each in the Real Academia de la Historia-Madrid, Biblioteca Pública del Estado-Biblioteca de La Rioja-Logrońo, and Monasterio de San Millán de la Cogolla de Yuso. Not located in Rebiun. Copac repeats British Library only. NUC: DLC, NNH. Buchnummer des Verkäufers 38006


Books are offered subject to prior sale. You may email, fax or telephone
to reserve a book; we will confirm its availability as soon as possible.

Overseas orders of rare books and manuscripts are shipped via
Global Express Mail or registered air mail, and shipping charges are billed to the customer.

Satisfaction guaranteed: all purchases from our stock of antiquarian
books and manuscripts are understood to be on approval, and may be
returned within a reasonable time for any reason whatsoever.