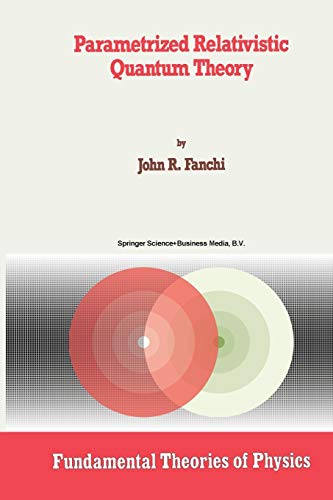 Language: English. Brand new Book. Over the past five de-::ades researchers have sought to develop a new framework that would resolve the anomalies attributable to a patchwork formulation of relativistic quantum mechanics. This book chronicles the development of a new paradigm for describing relativistic quantum phenomena. What makes the new paradigm unique is its inclusion of a physically measurable, invariant evolution parameter. The resulting theory has been sufficiently well developed in the refereed literature that it is now possible to present a synthesis of its ideas and techniques. My synthesis is intended to encourage and enhance future research, and is presented in six parts. The environment within which the conventional paradigm exists is described in the Introduction. Part I eases the mainstream reader into the ideas of the new paradigm by providing the reader with a discussion that should look very familiar, but contains subtle nuances. Indeed, I try to provide the mainstream reader with familiar "landmarks" throughout the text. This is possible because the new paradigm contains the conventional paradigm as a subset. The foundation of the new paradigm is presented in Part II, fol!owed by numerous applications in the remaining three parts. The reader should notice that the new paradigm handles not only the broad class of problems typically dealt with in conventional relativistic quantum theory, but also contains fertile research areas for both experimentalists and theorists. To avoid developing a theoretical framework without physical validity, numerous comparisons between theory and experiment are provided, and several predictions are made. Softcover reprint of the original 1st ed. 1993. Buchnummer des Verkäufers LIE9789401048606

Parametrized Relativistic Quantum Theory presents the development of a new theory for describing relativistic quantum phenomena. The theoretical formalism is supplemented by numerous applications in classical and quantum theory, particle and nuclear physics, cosmology, and statistical physics. The theory handles the broad class of problems solved by conventional relativistic quantum theory, and contains fertile research areas for both experimentalists and theorists. Numerous comparisons between theory and experiment are provided, and several predictions are made.
The book will interest graduate students, academicians and researchers in quantum mechanics, field theory, nuclear and particle physics, relativity and cosmology, statistical physics, classical mechanics, probability theory and statistics, and the foundations and philosophy of physics.