Verwandte Artikel zu The Peaks, Passes, and Glaciers of the Caucasus.

Home FRESHFIELD, Douglas W. The Peaks, Passes, and Glaciers of the Caucasus. 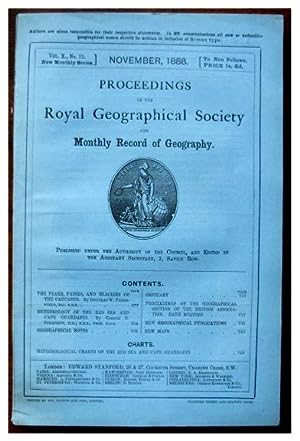 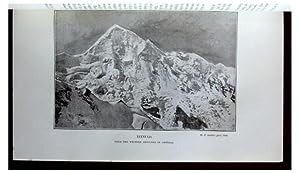 The Peaks, Passes, and Glaciers of the Caucasus.

Narrative is 30 pages, including one black and white plate showing the Tetnuldi peak. Original condition with blue wrappers, titles to front, and containing all the ads. This is a complete issue, seldom found in such good and original condition. Renowned mountaineer and explorer, Freshfield describes physical features of the Central Caucaus, featuring the Svaneti region of Georgia. Drawing on his foremost explorations and ascents, he examines several theories on the majestic formations. Discussion includes erosionist theories, geological observations by Ernest Favre, aspects of glaciology by Mr. Reclus, and much more. Freshfield was a former President of the Alpine Club and an honorary secretary of the Royal Geographical Society. He travelled widely over classical ground in the Near East, for second only to his love of mountains was his interest in classical life and lore. In 1868 he led an exploration of the central Caucasus which, except for the lower heights, were then unknown. He made the first ascent of Kazbek, Elbruz, and several other peaks. This enlightening account pre-dates Freshfield's all-important book, The Exploration of the Caucasus, which was first published in 1896, in which he described the denuded territories of Abkhazia in a moving chapter on 'The Solitude of Abkhazia.'. Buchnummer des Verkäufers 024548

Titel: The Peaks, Passes, and Glaciers of the ...

We specialize in Manuscripts, Archives and Photographs about Travel & Exploration


The condition of all books has been described; all items are guaranteed to be complete unless otherwise stated. Prices do not include shipping, however, we offer FREE SHIPPING on US orders. Invoices will be rendered in US$. The title of goods does not pass to the purchaser until the invoice is paid in full. We accept Visa, PAYPAL, Mastercard as well as personal checks and money orders in US$, UK Ł Sterling, EUROS and CAN$. Members of ABAC - ILAB and the PBFA


We offer FREE SHIPPING on US orders. Items are shipped domestically from WA State with Media Mail. Overseas orders attract a nominal shipping charge and will be shipped either from WA State or Canada.