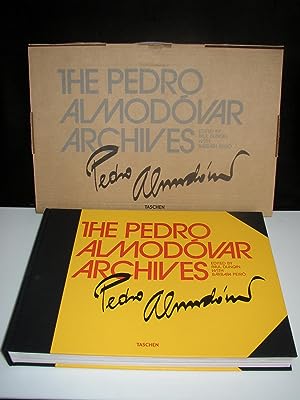 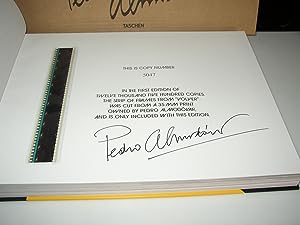 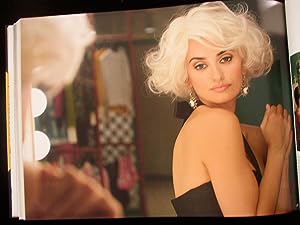 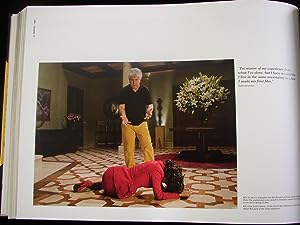 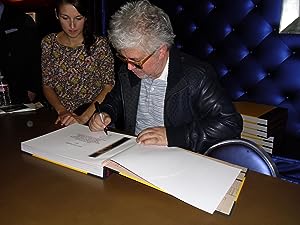 First Printing. 408 pages. A Deluxe Edition with a worldwide print run of 12,500 of which this is book No. 5047. Signed boldly by Pedro Almodovar on the limitation page. Also included is an actual 35 mm film strip from the movie Volver from Almodovar's personal library. This massive book is a retrospect of Pedro Almodovar's legacy of films and attitudes. The book measures 15 inches wide and, when fully open, the photographs practically come alive. A great addition to any Pedro Almodovar collection or film library. Paypal always welcome. We pack and ship all our books with care in cardboard boxes. Additional photos emailed upon request. For Overseas shipping, check us on EBay. Buchnummer des Verkäufers 11-11-11 Case

This title presents the complete works of Pedro Almodovar: a personal journey with one of contemporary cinema's the most esteemed film artists, made with Almodovar's collaboration and with full access to his archives. Un film de Almodovar: whether appearing in his stylish opening credits or on the suggestive poster that invariably accompanies each of his films, this announcement triggers a range of expectations. Sexy and subversive, colorful and controversial, passionate and provocative, Pedro Almodovar's world is unlike any other director's. Thanks to his remarkably cohesive and consistent oeuvre, the Manchegan maverick has become a reliable brand, his name a byword for the visual opulence, experimentation and eroticism of post-Franco Spanish cinema. Almodovar found fame with self-penned, gender-bending plots depicting the often comic misfortunes of junkies, nuns, housewives, whores, transvestites and transsexuals. Praised by critics, championed by fellow film-makers, adored by actors and adorned with international awards, he is the most successful Spanish film-maker since Luis Bunuel, with films such as "Women on the Verge of a Nervous Breakdown", "All About My Mother", "Talk to Her", and "Volver". A self-taught auteur, Almodovar draws on influences as diverse as Douglas Sirk, Frank Tashlin, Andy Warhol and John Waters. His feature films borrow liberally from, and frequently invert, traditional genres of classic American cinema-including film noir, melodrama and screwball comedy. Yet they remain unmistakably Iberian, rooted predominantly in the director's beloved Madrid, exploring Spanish myths and modernity to the rhythms of bolero-laden soundtracks. Most recently, the enfant terrible of the 1980s arthouse scene has matured into the Academy Award-winning director of "All About My Mother", a film universally acknowledged for its emotional resonance, sophistication and craftsmanship. Almodovar's distinctive, once marginalized world has finally entered the mainstream. For this unprecedented monograph, Pedro Almodovar has given TASCHEN complete access to his archives, including never-before-published images, such as personal photos he took during filming. In addition to writing captions for the photos, Almodovar invited prominent Spanish authors to write introductions to each of his films, and selected many of his own texts to accompany this visual odyssey through his complete works.


We ship all continental and NON P.O. Box through UPS and international and P.O. Box through USPS. All books are shipped in well packed boxes. (or cardboard packed and reinforced Priority envelopes) We recommend insurance on all books offered, which is at buyer's cost or we might insist on Registered Mail. Additional payment options are with Pay Pal, check, m/o, or all major credit cards. Books are mailed after clearance of payment, which is due within five days of purchase. CA residents: please ...