Verwandte Artikel zu A Persuasive to Conformity, Address'd to the Quakers....

Home Rogers, John A Persuasive to Conformity, Address'd to the Quakers. By J. ... 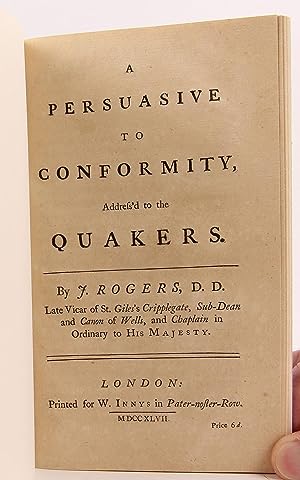 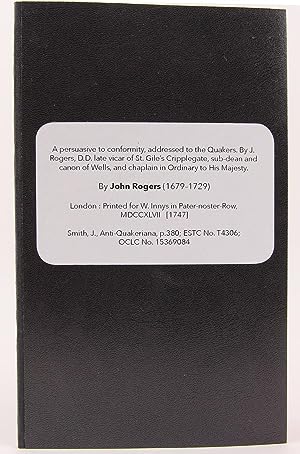 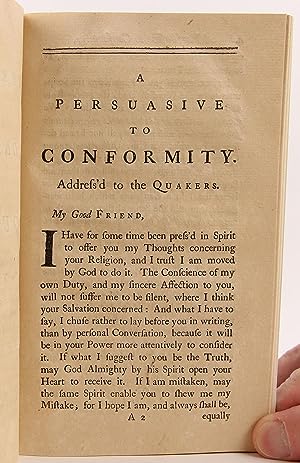 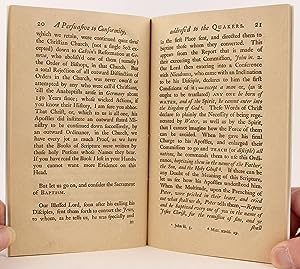 A Persuasive to Conformity, Address'd to the Quakers. By J. Rogers, D.D., Late Vicar of St. Gile's Cripplegate, Sub-Dean and Canon of Wells, and Chaplain in Ordinary to His Majesty.

B0112B5MR6 1747 first edition 'Printed for W. Innys in Pater-noster-Row' (London), newly rebound, 4 1/2 x 7 1/2 inches tall dark grey paper-covered boards over black Milbank cloth spine, white printed label to front cover with full title and bibliographic information, refreshed (Japanese Carlyle) endpapers, 35, [5] pp. A couple of instances of very slight marginal foxing. Otherwise, apart from minor age toning and creasing, a very good copy of this scarce pamphlet. References: English Short Title Catalog No. T4306; J. Smith, Anti-Quakeriana, p. 380; OCLC No. 15369084. Standard shipping orders upgraded free to First Class. ~YYY~ An anti-Quaker tract by John Rogers (1679 - 1729), an Anglican clergyman and writer, published posthumously. He gained a reputation as one of more than 50 writers who weighed in on the so-called Bangorian Controversy, a theological argument within the Church of England in the early 18th century, with strong political overtones. Rogers was among those joining with Francis Hare in the attack on Benjamin Hoadly, the Bishop of Bangor, who had launched the controversy in 1717 in a sermon to King George I of Great Britain in which Hoadly asserted that there was no Biblical justification for any church government of any sort. In 1719 Rogers wrote 'A Discourse of the Visible and Invisible Church of Christ,' attempting to prove that the powers claimed by the priesthood were not inconsistent with the supremacy of Christ or with the liberty of Christians. This anti-Quaker work offered for sale was among his writings published several years after his death, along his 'Persuasive to Conformity addressed to the Dissenters.'. Buchnummer des Verkäufers YYY-0751-3668

Titel: A Persuasive to Conformity, Address'd to the...