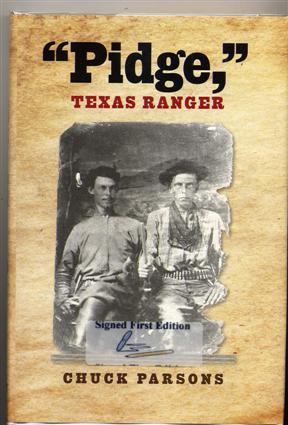 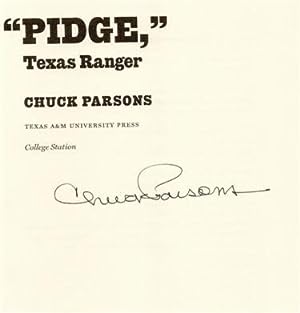 A First Edition (stated on copyright page) signed by the author on the title page. Signed only - no other names, writing, or marks. Dust and book are in Fine, as new condition. Thomas C. (Pidge) Robinson. , as a Texas Ranger rode with McNelly's Rangers and witnessed and participated including the exploits of John Wesley Hardin, intervening in the Taylor-Sutton Feud, and fighting border skirmishes with Juan Cortina. Robinson, writing under the pseudonym was a columnist for the Austin's "Daily Democratic Statesman". 200 pages notes, bibliography, index. ; Standard Book Size.; 200 pages; Signed by Author First Edition is stated on the copyright page. Bestandsnummer des Verkäufers 125092

"Noted Western author Chuck Parsons delved into the life of the writer-ranger and tells his story through an annotated collection of his writings." --Glen Dromgoole-- (01/05/2014) "Parsons' detective work on the near-mythical Pidge is invaluable for historians traveling the genealogical research road of the Lone Star State's earliest decades, which ironically cover the same time frame of Pidge's short life, 1846-76. Parsons also graciously shares the details of his research through extensive footnotes. These provide an accessible template for historians tracking the life stories of Texans through the briar of newspapers, census reports and archival collections that have survived the turmoil of the time from Texas to Virginia. Parsons presents a treasure trove of primary sources, especially excerpts of letters and poems Pidge published while riding with the Rangers. While the work of a Ranger was dangerous, Parsons' biography of the mysterious Pidge reveals the romantic origins of our mythic heroes of saddle and spur, six-gun and Stetson."--True West--True West "Chuck Parsons has done himself proud with this book. It combines exhaustive history-mystery sleuthing with good, old-fashioned storytelling about a fascinating central character and a fascinating part of Texas frontier history."--Bill O'Neal, Wild West History Association Journal -- (06/25/2013) "Chuck Parsons, one of the most prolific writers and historians on the world-famous law enforcement organization known as the Texas Rangers, has certainly outdone himself with 'Pidge, ' Texas Ranger. Readers will be enrapt in the exploits of T. C. 'Pidge' Robinson as he rode with McNelly's Rangers in their efforts to quell the Sutton-Taylor Feud of South Texas and combat the border outlaws and Cortinistas on both sides of the Rio Grande. Between Pidge's beautifully written letters providing a compelling picture of what Texas was like in the 1870s and newly discovered historical material regarding this young Ranger, Parsons has woven together a story that is the stuff of a Shakespearean drama."--Donaly E. Brice, Texas State Archives -- (01/15/2013) "Once again, Ranger historian and storyteller Chuck Parsons has given his readers a typically disarming tale of intrigue and frontier Texas adventure, wrapping it around the tragic circumstances that led to the death of Truxton "Pidge" Robinson in a passionate dueling shoot-out back home in Virginia. The captivating letters written by Robinson while working as a newspaperman in Austin serve as a backdrop to the coarse but bucolic world of Reconstruction Texas, and lend texture and grace to those otherwise hardscrabble days. Pidge, Texas Ranger is a delightful read."--Paul N. Spellman, author, Spindletop Boom Days and Forgotten Texas Leader, and professor, Wharton Junior College -- (12/13/2012) "Parsons has put together a book that is readable, informative, and a source of stimulation. It is a book to savor." --Southwestern Historical Quarterly-- (09/23/2014) "The Texas Rangers were far more than a law enforcement group second to none. As with any group of individuals they brought with them diverse backgrounds and skills. Now, due to the diligent research of noted historian Chuck Parsons, the tale of Pidge has been unearthed and has come to life with the excitement, violence, and tongue in cheek humor that Pidge brought to McNelly's Rangers. This is a volume worth reading and rereading."--David Johnson, author , The Mason County "Hoo Doo" War, 1874-1902 and John Ringo, King of the Cowboys -- (12/18/2012) ." . . a book I think most everyone who feels the burden of memory will love."--Dallas Morning News "Corder's book echoes with questions about memory and reality and how we view ourselves in terms of our own pasts . . . [and] provides a treasured map of one man's search for the past and an apt reminder to the importance of the search."--Southwestern Historical Quarterly "Any lover of good books will be captivated by this unusual treatment of the eternal problem of 'going home again.'"--Booklist "Corder's gleanings--leavened with his own pointillist illustrations--will appeal to nostalgic contemporaries and to curious younger readers."--Fort Worth Star-Telegram