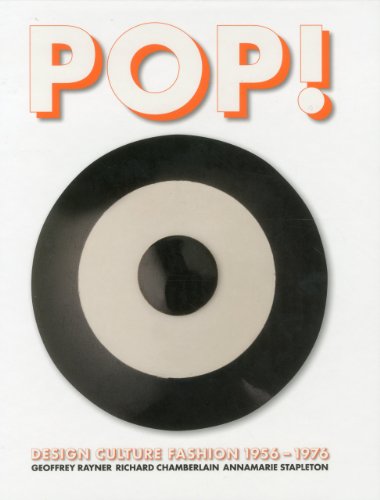 Language: English. Brand new Book. POP! Design, Culture, Fashion 1955-1976 explores the impact of music, art and personality on the development of the design and fashion of the times. Published to accompany an exhibition at the Fashion and Textile Museum, London, July - October 2012. Pop! Design, Culture, Fashion 1956-1976 covers all aspects of Pop design in Britain and America, from early rock 'n' roll to punk. It looks at record covers and packaging designs by Pop artists such as Andy Warhol, Peter Blake and Richard Hamilton, and the work of fashion designers such as Mary Quant, Barbara Hulanicki from Biba, Vivienne Westwood and John Stephen of Carnaby Street fame, as well as their contemporaries in America such as Betsey Johnson of Paraphernalia. Pop graphics are also covered, from the psychedelic posters of Alan Aldridge, and the design collective 'Hapdash and the Coloured Coat' to rock posters from San Francisco and the west coast of America. There are also reproductions of rarely-seen underground magazines such as Oz, Gandalf's Garden, l' Actuel and the International Times.The ephemeral nature of much of Pop design is explored - from paper furniture and 'throwaway' paper dresses, to longer-lasting trends such as Union Jack clothing, metal badges, machine-embroidered denim, printed t-shirts and tin badges. The book also looks at the work of 'Them', an influential group of 'Baroque Pop' designers who coalesced around Zandra Rhodes in the early 70s, and ends with the anti-design of punk fashion by Vivienne Westwood, and the self-proclaimed 'horrible by design' punk graphics of Jamie Reid. Whilst there have been innumerable books on the Swinging Sixties, and on Pop Art, this is the first book to look at Pop design over a twenty year span, and to examine the interconnected nature of so many elements of the phenomenon such as books and magazines, music, film, fashion and graphic art. It is also unique in that the illustrations are not sourced from the usual magazine archive images, but are photographs of the artefacts themselves, from Elton John's waistcoat, embroidered with suns, stars and rainbows, to Twiggy coathangers, psychedelic book covers and every teenager's must-have item: 'Glo Glo boots for Go Go girls'.Geoff Rayner and Richard Chamberlain are experts in post-war design, specialising in the history of textiles. They have curated a number of exhibitions, and written (with Annamarie Stapleton) several books most recently Artists' Textiles 1945-76ISBN: 9781851496297 (published by Antique Collectors' Club, 2012). Buchnummer des Verkäufers BTE9781851496907

Críticas: ...the book is a stunning visual guide to the graphics and ephemera that has created the myth and memories of when Pop was born. --Design Week

Buchbeschreibung Antique Collectors Club Dist, 2012. Zustand: Good. A+ Customer service! Satisfaction Guaranteed! Book is in Used-Good condition. Pages and cover are clean and intact. Used items may not include supplementary materials such as CDs or access codes. May show signs of minor shelf wear and contain limited notes and highlighting. Bestandsnummer des Verkäufers 1851496904-2-4