Verwandte Artikel zu Practical Discourses Upon the Parables of Our Blessed...

Home Bragge, Francis Practical Discourses Upon the Parables of Our Blessed Saviour, ... 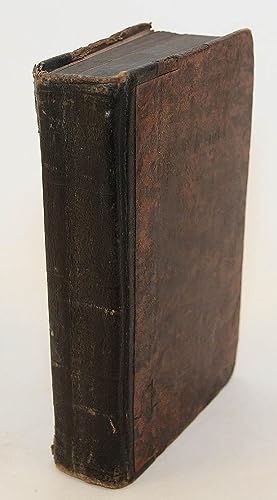 Practical Discourses Upon the Parables of Our Blessed Saviour, with Prayers Annex'd to Each Discourse.

B00JLS1V0U 1694 first edition 'Printed for S. Manship, at the Ship near the Royal-Exchange in Cornhil' (London), 4 1/4 x 6 3/4 inches tall full leather bound, [16], 480 pp. The book appears to have been rebacked at some point, using the original leather-covered boards. Moderate to heavy rubbing, bumping and edgewear to covers. Lacks front blank endpaper, but an otherwise complete copy. Prior owner name stamped to front pastedown. Binding is quite solid. Underlining and marginal marks in colored pencil to many pages, mostly in the first half of the book. Soiling and foxing to the occasional page. Otherwise, a good, complete copy of an exceptionally scarce first edition. The English Short Title Catalog locates only four copies in the U.S. (Huntington Library, New York Public Library, UCLA and University of Illinois), and six other copies worldwide. Reference: Wing (2nd ed., 1994), B4201; ESTC No. R35338. ~NNN~ When this work was published in 1694, author Francis Bragge (1664-1728), an Anglican clergyman, was vicar of Hitchin, a market town in Hertfordshire, England. Bragge authored a number of books, but this, 'Practical Discourses Upon the Parables of Our Blessed Saviour,' was apparently quite popular, by 1724 going into a sixth edition. Bragge's collected works were published in 1833 in five volumes by Oxford University Press. The parables of Jesus can be found in all the canonical, and some of the non-canonical, gospels, but are located mainly within the three synoptic gospels. They represent a key part of the teachings of Jesus, forming approximately one third of his recorded teachings. Christians place high emphasis on these parables; since they are the words of Jesus, they are believed to be what the Father has taught, indicated by John 8:28 and 14:10. Buchnummer des Verkäufers NNN-0441-504

Titel: Practical Discourses Upon the Parables of ...

Verlag: Printed for S. Manship, at the Ship near the Royal