Verwandte Artikel zu The Pricke of Conscience (Stimulus Conscientiae), a...

Home Hampole, Richard Rolle of The Pricke of Conscience (Stimulus Conscientiae), a Northumbrian... 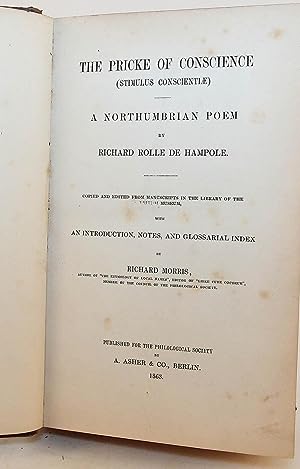 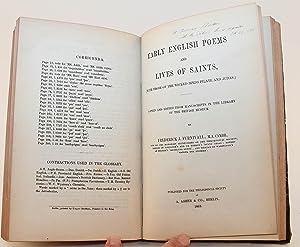 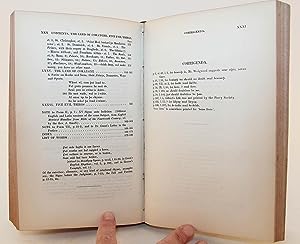 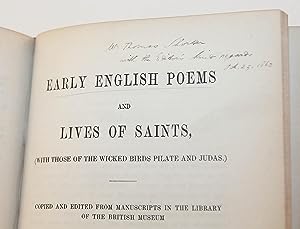 The Pricke of Conscience (Stimulus Conscientiae), a Northumbrian Poem By Richard Rolle De Hampole, Bound Together with Early English Poems and Lives of Saints, Edited From Manuscripts in the Library of the British Museum By Frederick J. Furnivall

B00JFWYTL0 Two scarce Berlin-printed early English philological/religious works bound in one volume: (1) 'The Pricke of Conscience,' 1863 first edition A. Asher & Co. for the Philological Society (Berlin), xli, 328 pp.; and (2) 'Early English Poems and Lives of Saints,' 1862 first edition A. Asher & Co. for the Philological Society (Berlin), xxxi, 180 pp. 5 1/2 x 8 7/8 inches tall hardbound, marbled boards over leather tips and spine, gilt-lettered red leather label to spine. The second work, 'Early English Poems,' is a presentation copy inscribed on the title page in the year of issue by the editor, Frederick Furnivall, to Thomas Shorter (1823-1899), an English poet and one of the founders of the spiritualist movement in Britain. The covers of this handsomely-bound volume are rubbed, bumped and edgeworn, with cracking and chipping along the spine. Mild foxing, especially to front and rear preliminaries. Neat prior owner marginalia to at least three pages noted. Otherwise, a very good copy of these two scarce works. The inscription from Frederick Furnivall on the title page of the second work reads, 'Mr. Thomas Shorter with the Editor's kind regards. October 25, 1862.' ~JJJ~ Richard Rolle (1290/1300-1349) was an English religious writer, Bible translator, and hermit. He is also known as Richard Rolle of Hampole or de Hampole, since after years of wandering he settled near the Cistercian nunnery in Hampole, Yorkshire. Rolle probably began writing in the early 1330s, and continued until his death - but there is no certain chronology of his various works. He wrote in both Latin and English, with his English works apparently all dating from after circa 1340. Rolle's works were widely read in the fourteenth and fifteenth centuries, more so even than Chaucer. Works of his survive in about 470 manuscripts written between 1390 and 1500, and in 10 sixteenth and early-seventeenth century printed editions (including the sixteenth-century edition by Wynkyn de Worde). This poem, 'The Pricke of Conscience,' about the Last Days, is now attributed by some scholars to an anonymous author. In the early fifteenth century copies of the poem were known to have been in the possession of important members of the laity, including Alice Bolton who gave windows to All Saints North Street, York. A window on the theme of the poem at All Saints is dated circa 1410 and related in style to the great east window of York Minster, that depicts the Book of Revelations. The second work bound here, 'Early English Poems and Lives of Saints,' was edited (and inscribed) by Frederick James Furnivall (1825-1910), an English philologist who was one of the co-creators of the Oxford English Dictionary. He founded a number of learned societies on early English literature, and made pioneering and massive editorial contributions to the subject, of which the most notable was his parallel text edition of the Canterbury Tales. He was one of the founders of and teachers at the London Working Men's College (initially a Christian socialist school) and a lifelong campaigner against what he perceived as injustice. The prior owner of the second work, Thomas Shorter (1823-1899), also known as Thomas Brevior (a Latinized version of his name), was an English poet, and the secretary of the Working Men's College (no doubt how he came to meet Furnivall). Shorter was one of the founders of the spiritualist movement in Britain, and wrote extensively on the subject. In later life, he became blind, but he still wrote poetry and remained politically and religiously active. Buchnummer des Verkäufers JJJ-0441-465

Titel: The Pricke of Conscience (Stimulus ...